Home Featured The 2017 NBA Draft Class Could Be One Of The Greatest, Or Not

The 2017 NBA Draft Class Could Be One Of The Greatest, Or Not 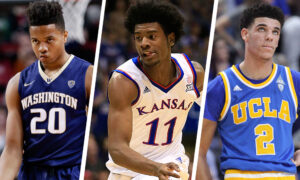 Although the 2017 NBA draft is loaded with talented young players, success is not guaranteed.

The 2017 NBA Draft featured a star-studded class loaded with talent, particularly at the guard position. Players such as Markelle Fultz, Jayson Tatum, Justin Jackson, De’Aaron Fox, and Dennis Smith Jr. all made up the top of this year’s draft class.

But perhaps the most talked about NBA draftee was the No.2 overall pick, Lonzo Ball. Of course, Lavar Ball has a lot to do with the spotlight that is now shining brightly on his son. Not to mention his little brother, LaMelo, who scored 92 points in a miraculous, yet unconventional fashion, in a high school basketball game.

Lonzo has already received the praise of Lakers’ legend, Magic Johnson, the team’s President of Basketball Operations. Will Lonzo stick around in LA and have a career worthy of all the attention, or will he not be the player many hope and expect him to be?

Summer League basketball has allowed NBA rookies, young players, and players looking to make a roster, an opportunity to showcase their talents. Fultz, Tatum, and Fox are a few that have  stood out thus far.

But  who will we be hearing the most from down the road? Let it be clear that the NBA is full of competitive, resounding talent. Big men are revolutionizing the game as we know it, and wings are becoming longer, taller, and more athletic than ever.

The number of talented, yet replaceable point guards in the NBA is tremendous. Players such as Frank Mason and Josh Hart who lead their teams to great records in college, will struggle just to make a roster in today’s NBA. Consider that high caliber guards like Damian Lillard, who averaged 27 per game, can’t make the All-Star team.

And with Fultz, Tatum, Jackson, Fox, Smith Jr., and Malik Monk, among others going into the league, will Ball prove to be a great point guard for the Lakers?

Let’s face it, every year, many expect several players to be better than what they actually pan out to be in the NBA.

It is just a reality of the business.

Think 2013 draft, full of 60 players. The cream-of-the-crop in today’s game from that draft are  Milwaukee’s Giannis Antetokounmponteko, Utah’s Rudy Gobert, and Portland’s CJ McCollum. Victor Oladipo was the No. 2 overall pick, but he has not played to that level.

From the 2014 draft only Andrew Wiggins and Joel Embiid stand out as the stars, with guys like Aaron Gordon Julius Randle, and Dante Exum not panning out so far.

Even No. 2 overall pick, D’Angelo Russell, proved to not be good enough over his short, two-year, stay with the Lakers after the 2015 draft.

The main thing to take out of this is that regardless of who you’re rooting for, or what you’re expecting, it is best to lower our expectations of some of these players in the 2017 draft.

This draft class certainly has the potential to be as great, if not better than the ‘03, ‘96, and even the famed ‘84 draft, which includes Michael Jordan, Hakeem Olajuwon, Charles Barkley and John Stockton.

However, with the competition level like it has never been before, it wouldn’t be a surprise to not hear about many of the draftees from this year’s class five years from now.

The questions everyone wants answered: Who will be the stars of this year’s draft? Fultz proved to be a dominant scorer, but will that translate to the NBA? Does Lonzo have the strength, scoring ability, and intangibles to be a star in this league? Will  Fox be able to shoot the ball well enough? Will Tatum and Jackson’s all-around talents be enough to take over the league when LeBron James, Kevin Durant, and Kawhi Leonard are past their prime?

Who are the sleeper’s? Will Dennis Smith be someone that many would have regret passing on down the road? What about Bam Adebayo and Malik Monk?

Tune in. It will be interesting to see how these talented rookies play this year, and continue to develop for years to come.