Home Culture AMERICA’S TRADITION OF PATRIOTISM IS FILLED WITH HYPOCRISY

AMERICA’S TRADITION OF PATRIOTISM IS FILLED WITH HYPOCRISY 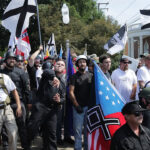 America is arguably more divided today than any time in its history.

It is disgusting to hear all of this talk of ‘patriotism’ in America related to the NFL’s new policy that prohibits players from kneeling on the sidelines during the playing of the Star Spangled Banner.  Part of a statement from NFL commissioner Roger Goodell read:

“It was unfortunate that on-field protests created a false perception among many that thousands of NFL players were unpatriotic. This is not and was never the case. This season, all league and team personnel shall stand and show respect for the flag and the anthem. Personnel who choose not to stand for the anthem may stay in the locker room until after the anthem has been performed. We believe today’s decision will keep our focus on the game and the extraordinary athletes who play it — and on our fans who enjoy it.”

Well, Mr. Goodell, if it was ‘never the case’ that players were being unpatriotic, why is it you put a rule in place to prohibit them from kneeling, and to a song with an homage to slavery, at that?  And why is your league punishing Colin Kaepernick?

It has been made perfectly clear from the beginning that none of these demonstrations are anti-American.  In fact, the protests are intended to assist our beloved country in doing precisely what our constitution preamble declares as it’s purpose: “…in order to form a more perfect union”.

The latest attempt to do so began with Colin Kaepernick in 2016 but spans back more than 20 years when NBA standout Mahmoud Abdul-Rauf expressed his feelings regarding what the flag must embody in a nation that ignores bigotry.  Each of these athletes has loved America enough to make personal sacrifices to see it become all that it can be.

I think of my late father (Joe Hampton) during the Memorial Day weekend.  My father attended segregated schools, served this nation in a segregated army, and then went home to Nashville, Tenn., where he lived in a segregated community.  When he chose to be a professional golfer, he was again met with discriminatory policies.  At that time the PGA Tour’s constitution stated that its members would ‘be of the caucasian race only’.

Nonetheless,  because of my father’s courage, determination, character, and talent he was able to skirt some of the blatant discrimination policies and go on to forge a career in golf.   In 1954 he became the head pro at Cumberland Golf Course in Nashville.

He would serve in that capacity for the next 47-years, where he introduced the game of golf to literally dozens of players of all colors and was instrumental in helping to integrate the public courses in Nashville.  I am proud and in awe of what my father overcame. However, he, like the rest of us only had one lifetime and I am left to wonder what he might have achieved had his energies not been needed trying to make his nation willing to live up it’s creed, that all men here, on this soil for which men of all races have fought and died all men are created equal.

I further wonder, where were all the patriots who should have been fighting for my father’s rights, and the rights of millions of black men and women who lived as second-class citizens? Certainly, some were there. It is remiss to not talk about the courage of many members of America’s white communities who were on the front lines of the fight for civil rights.

Despite how America treated my father, he loved this country. He served in the armed forces and spent his life making a positive contribution to his community.  In addition, I would venture to say that most members of the black community will tell you they love America, and wouldn’t want to live anywhere else.

Our protestors want to be part of, and enjoy, the opportunities this great democracy offers.  They want America to live up to the hype that some in white America pretend to respect, believe in and love.

And while there have been advances, it has come with much sacrifice. America had to be pulled into its current form of equality and justice.

I was born in a segregated hospital. My mother and father lived nearly two-thirds of their lives under policies of segregation and discrimination. Consider that my two children will be the first of at least five generations of Hamptons who were born into an America that is devoid of lawful segregation policies. Of course, their world is hardly free of hatred and racism, despite the fact they were witness to the historic election of President Barack Obama.

Today, our young people see a man who is in the White House who is a racist, bigot and admitted sexual assaulter. And we know this racist president’s mantra of ‘Make America Great Again’ is really dog-whistle to those who would love to reclaim their hypocrisy and see Black America return to being second class citizens.  These same people see excessive violence perpetrated on black men and women by police, with those officers rarely facing any consequences an acceptable part of a justice system.

And now, one of the greatest indignities comes from the greedy National Football League, whose patriotism is tied to a multi-million deal with the armed forces,  cow-tows to the racist president, while trying to muzzle those young men who, in an act of peace and dignity, take a knee in order to point out the shortcomings and failures of America’s promise to all of its people, not just some.