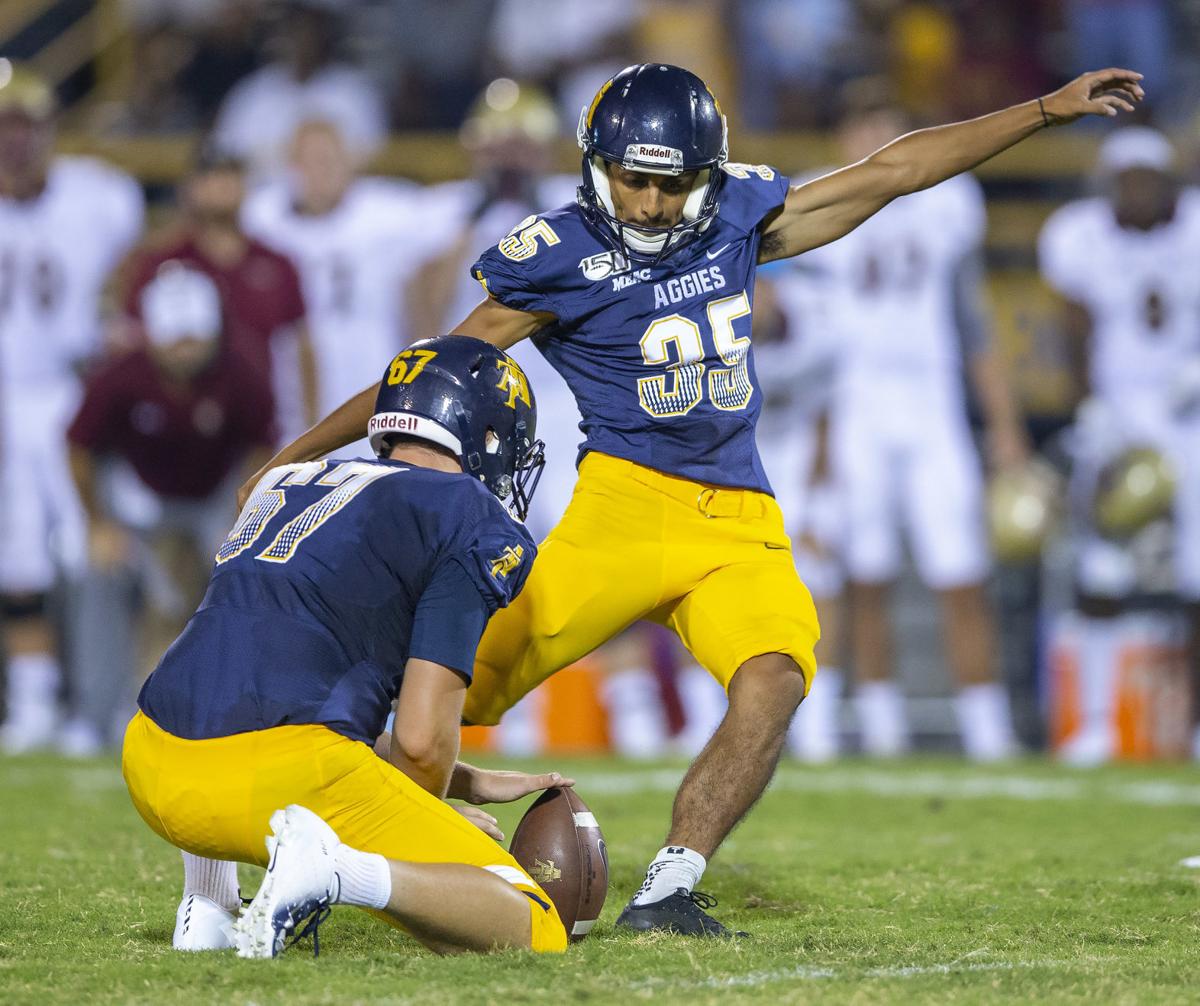 Junior Noel Ruiz booted a 52-yard field goal, tying the school record, as time expired to give Aggies a 24-21 victory against No. 21 Elon.

Ruiz had missed from 40 and 43 yards earlier in the fourth quarter before nailing the winning kick with relative ease.

“I really didn’t adjust anything,” Ruiz said. “I still trusted everything. I knew I had it in me. My teammates really helped me out big time, but I didn’t change a thing.”

Ruiz almost didn’t get an opportunity for his last-second heroics. The play before Ruiz’s kick began with nine seconds remaining in the contest.

Quarterback Kylil Carte scrambled for seemed like an eternity before he launched a pass that Korey Banks caught out of Banks. Fortunately for the Aggies, one remained on the clock, and that was plenty of time for Ruiz to do his thing.

Despite Ruiz’s prior misses, second-year Aggies coach Sam Washington said not attempting the field goal never occurred to him.

“It was not even a thought,’’ Washington said. “It really wasn’t. “We didn’t even have a conversation about it. I was upset with him, but I never lost confidence in him.

“I trusted him, and he delivered. The key was not letting the clock run out. I thought that would have been the dumbest thing that could have happened.”

Ruiz’s field goal tied the school record originally set by Yonnick  Matthews against Elon in 2003. It was the Aggies’ first field goal from 50 yards or more since Carlos Davalos made a 50-yarder against North Carolina Central in 2004 and their first winning field goal since Davolos kick against the Eagles.

The win was the fourth in a row for North Carolina A&T against Elon, which is only a 20-minute drive from Greensboro. The Phoenix compete in the CAA, widely considered to be the strongest FCS conference in the country, and they have reached the playoffs each of the previous two seasons.

North Carolina A&T spotted Elon a 7-0 first-quarter lead with De’Sean McNair scored on five-yard. The Aggies responded with a pair of touchdowns for a 14-7 halftime lead. Junior running back Jah-Maine Martin scored North Carolina A&T’s first touchdown on a one-yard in the second quarter.

The Aggies took a 14-7 lead when wideout Elijiah Bell made a spectacular one catch along the right sideline of the end zone with a defender draped all over him.

The catch made Bell the Aggies’ career leader with 26 touchdown reception, surpassing Denzel Keyes. Bell finished the contest with nine catches for 93 yards.

North Carolina A&T’s defense had a stellar performance. The Aggies limited Elon to 221 yards total offense, including 19 on 33 rushing attempts.

Here are other key games from Black College Football:

S. C. State 28, Wofford 13 – The Bulldogs pulled off the first upset of the 2019 Black College Football season with a home victory against the Terriers, who entered the contest ranked No. 8 in the FCS.

South Carolina State’s defense stood tall with four interceptions. “This was a big win for our program beating a team like Wofford,” Coach Buddy Pough said. “Our defense played well, and it gave us a chance throughout the game. We played a good solid cohesive football today. The reason why we won the football game is because we didn’t turn the football over much, and the defense took the ball away from them.

The Bulldogs only generated 276 yards total offense, but they had only one turnover and were able to capitalize on the turnovers their defense created.

Prairie View A&M 44, Texas Southern 23 – The Panthers continued their dominance of the Tigers, their SWAC arch-rivals, with a resounding victory in the Labor Day Classic at BBVACompass Stadium in Houston.

The win was the fourth in a row for Prairie View and its 13th in the last 16 meetings. The Panthers rolled up 15 yards total offense Senior running back Dewonya Tucker was the big gun for Prairie View with 190 yards and three touchdowns on 11 carries.

Quarterback Jalen Morton threw for 350 yards and two touchdowns while completing 24 of 42 attempts. Prairie View led 23-13 at the half after starting slowly and broke the game open on a pair of touchdown passes by Morton in the third quarter.

Bethune-Cookman 36, Jackson State 15 – The Wildcats took charge of the game in the second half with their defense en route to victory in the 15th MEAC/SWAC Challenge Sunday at Georgia State Stadium.

Bethune-Cookman forced Jackson State to turn the ball over three times on its first four possessions in the third quarter.

The Wildcats converted the miscues into 15 points and took a 22-15 lead. Bethune-Cookman put the game away in the fourth quarter when Jackson State quarterback Derrick Ponder scrambled out of the pocket and fumbled the ball at Bethune-Cookman’s four.

Junior linebacker Rashon McNeil picked the ball up and rumbled 96 yards for a touchdown. The victory for Bethune-Cookman ended the SWAC’s two-game winning streak in the Challenge.

The MEAC leads the series 10-4. The 2016 contest between Bethune-Cookman and Alcorn State was declared no contest when it was halted in the second quarter due to lightning.

Jenkins ended the game with 12 catches for 120 yards. Glass threw for 397 yards. Morehouse had taken the lead, 30-28, less than a minute earlier when running back Santo Dunn leaped into the end zone from the one-yard line with 1:01 showing on the clock.

However, Glass drove the Bulldogs 61 yards in eight plays for the winning points. He completed six consecutive passes on the drive. The winning pass came on a second and 10 play after Coach Connell Maynor called a timeout.

Rather than sending field goal kicker Corey Spencer into the game, Maynor drew up the pass play. The win was the Bulldogs’ 16th in a row against Morehouse.