Elder Over Came Death Threats, Discrimination, To Pave Way For Tiger At Masters 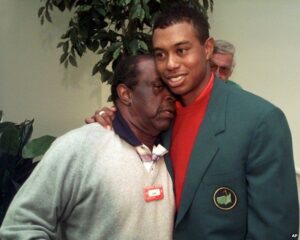 Lee Elder and Tiger Woods embrace after his 1997 Masters victory.

It is really great to see that Tiger Woods is back, and will be playing in the 2018 Masters. This is the 21st anniversary of Woods’ stunning, 1997 Masters’ victory, in which he lapped the field by 15 shots. That would be like winning the Super Bowl 50-0, or winning the NCAA basketball championship by 50 points.

That was a start to an utterly remarkable run of golf unlike anything we have seen before. Fourteen majors, 79 PGA Tour victories, which jumps to 115 victories world wide.  Not even the injuries and personal strife in Woods’ life can taint his incredible accomplishments.

He, along with Jack Nicklaus, are the two greatest players in the history of the sport.

For a lot of people, golf in the black community only started when Tiger burst on the scene. Hardly. Great players like Charlie Sifford and Teddy Rhodes, who challenged and defeated the PGA Tour’s ‘Caucasion Only’ rule which prohibited blacks from competing, were the pioneers.

Tiger and Charlie Sifford chatting in 2005.

In spring of 1975, eight months before Tiger Woods was even born, Lee Elder made history when he became the first black man to play in the Masters. Elder earned his spot in the prestigious tournament with a victory at the Monsanto Open, which was played in Pensacola, Fla. It was extra special for Elder to win there, because the club that hosted the tournament, refused to accommodate Elder. 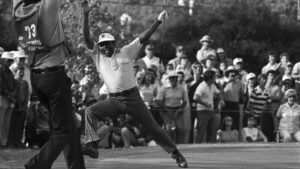 “I had made a statement that I would never go back there to Pensacola because we couldn’t go in the clubhouse. I went back in 1973 and played, then went back in 1974 and won,” said Elder  in a 2015 interview with CNN. “I was so overwhelmed with the fact that I had qualified and won there, the place where the problem had occurred.”

Elder received death threats throughout the week in Pensacola, and needed a police escort.
Elder shouldn’t have been the first black to play at Augusta. However, the Masters’ is an invitational tournament and the membership could change the rules as the pleased. Pete Brown became the first black to win on the PGA Tour when he won the Waco Open in 1964. Sifford captured the prestigious Los Angeles Open in the 1969, and Brown won the Andy Williams Open in 1970. No invitations. there were so many times when we were all close to qualifying for the Masters when the rules changed.
“You used to have to qualify through a points system. It was so hard for us for the fact we were not playing in that many tournaments and it was hard to accumulate the points.

“Then it was changed and they were going to take all tournament winners, then I knew it was a chance of getting to the Masters, 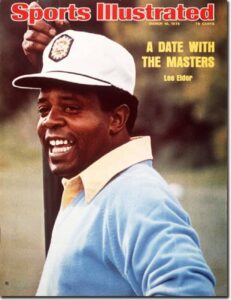 Elder graced the cover of SI. His Masters appearance was a worldwide story.

“…I knew it was something I had wanted ever since I came on to the Tour,” he said. “I think the reason why was there had been so much talk about no black man playing at Augusta, and after all that I wasn’t going to qualify and not go.”
With the world watching, Elder shot a two-over-par 74 in his opening round, and missed the cut. He did return to play five more times and had two top 20 finishes. Elder played fulltime on the PGA Tour from 1968 to 1984. He won four events, and earned more than $1 million in prize money. Elder would go on to enjoy success on the Senior PGA Tour.
He drove from Florida to Augusta to watch Woods play his final round at the 1997 tournament. It was a historic moment he simply could not miss. With every victory in his prime Woods carried on a tradition started by black PGA Tour players like Sifford, Rhodes, Elder and later Calvin Peete, Jim Thorpe, Jim Dent and others.
Considering all the trials and tribulations black golfers fought to earn the right to play, it is only fitting that arguably the game’s greatest player is a black man.
Facebook Comments