If Kap Would Just Hit Somebody He Could Get A Job 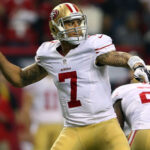 Kaepernick has thrown 72 touchdown passes in his career.

It seems extreme, but it’s clear his giving her a two piece is a viable pathway to employment in the NFL. The headlines bear that out. Right now Reuben Foster has been charged with felony domestic violence following a February incident. The Santa Clara District Attorney’s office said in a statement, that the San Francisco 49ers’ linebacker got into an argument with a woman at their home which left her with bruises and a ruptured ear drum.

Foster’s perceived character issues were so troublesome that teams removed him from their draft boards. Yet the 49ers took him in the first-round. And now his career is in limbo. Prosecutors charged Foster with one felony for that violent act, another felony for forcefully attempting to prevent the victim from reporting the crime, and a third felony for possessing an assault weapon. Foster is also charged with a misdemeanor for possessing a large capacity magazine. The charges could carry up to 11 years in prison.

The 49ers drafted Foster in the first-round last year despite questions about character issues that had some teams reportedly taking him off their draft boards. Team owner Jed York was noncommittal last month about whether Foster has a future with the team.

Foster — even if acquitted of the charges that could land him in jail for 11 years — will face NFL discipline, an NFL investigation (which could find him in violation of the league’s personal conduct policy) is in the NFL. Still.

Yet, Kaepernick, who has been without a team since opting out of his 49ers contract in March 2017 is frozen out.

It looked like his best chance was with the Seahawks, playing behind Russell Wilson after the team had enough of backup Trevone Boykin. Now, don’t think they got religion for releasing him after being accused of choking and beating his girlfriend. That just follows string of incidents like his arrest last year after a car he was in hit seven people on the side walk (he was later hit with public intoxication charges and possession of weed). According to Boykins’ girlfriend, the crash was caused when he attacked her while behind the wheel. That little mishap followed an incident in college where he assaulted a police officer, and was charged with public intoxication. And this is who the Seahawks had as their backup QB.

Kaepernick’s workout with Seattle was scuttled when he would not say he would stop kneeling during the national anthem next season to protest police brutality and racial inequality.

Among them  are Mike Glennon, A.J. McCarron and Chase Daniels. None of those QBs guided their former teams to a Super Bowl. Of course, there is one QB available that has led his team to a Super Bowl.  But he’s yet to run afoul of the law, and he does despicable stuff like donating $1 million to various charities. How dare he?

It is pitiful the NFL is so fearful of the people who have bought into the hijacked narrative that his kneeling is anti-American and anti-military irrespective of that nonsense being refuted perpetually. You’d think they’d be OK with not having folks so intellectually bereft to believe that narrative as fans. But the league is all about image. It’s a league that wants to project itself as staunchly pro-America, pro-military.

And all that would be awesome were it not a marketing gimmick.

By now we all know of the deal between the NFL and the Department of Defense where the DoD paid NFL teams for their patriotic displays. We all now know that nobody cared the players came out for the anthem until 2009 when this relationship began. It wasn’t a big deal before the DoD started writing checks to the NFL to the tune of $5.4 million between 2011 and 2014. Or when the National Guard got into the Pay-for-Patriotism scheme to the tune of $6.7 million with cash to the league between 2013 and 2015.

You see, it appears Kaepernick and other protesters’ sideline displays screwed up a marketing plan more than anything else.

So, because the league seems to be less concerned with annual instances of unacceptable behavior than legitimate protests, it looks like one of Kaepernick’s remaining options is to do something so personally irresponsible that he’ll land on a roster.