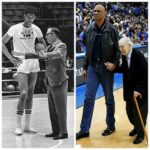 Kareem Abdul-Jabbar and John Wooden life long friendship is a perfect illustration of the power athletics has to bring people from all walks of life together.

Sometimes we forget. Sometimes we get so caught up in our
favorite team winning the championship, or these days, our fantasy team
prevailing, that we forget about the true meaning of athletics.

The essence of team sports
are not the big games, the championships, but the bonds and friendships that
last forever.

No doubt, winning has its place. But not even championships
at the highest levels take the place of the bonds formed by teammates, and the
friendships sown by season-ticket holders, who have sat next to each others in the
stands for the past 25 years, and now have passed those tickets on to a new
generation of family.

In the end, the Super Bowl isn’t that super. It comes along
every year, just like any other holiday. If your team doesn’t win this time,
maybe they will the next time. And, even when they do win it all, it is only a
while before next year’s championship comes into play.

Sports, at their best, bring
together people from all walks of life, black, white, brown, and all
ethnicities and religions.

There is a level of respect that coaches and athletes gain
from each other each day of practice, every road trip, and each game they
compete.

When you see your teammate open for a game winning layup in the final seconds, you don’t contemplate his race, politics or religion. You see him as your teammate that you have spent hours upon hours practicing with, and you trust him to finish the job. And what happens is that level of trust and respect extends into everyday life.

That bond takes place from the junior high level, to the
professional ranks. Think back to all the days of your high school teams, and I
bet you will smile about the memories.

All of this is captured in this wonderful picture of Kareem
Abdul-Jabbar, and his college coach at UCLA, John Wooden.

The first frame
shows the two at UCLA, with Kareem listening and looking intently, while the
Wizard of Westwood teaches him the finer points of the game.

The second frame is just beautiful. It illustrates the lifelong
bond formed during their four years at UCLA. You can see, and practically
feel, the love and respect and admiration Kareem has for his former coach, as
they walk hand and hand.

I am not sure of how many years had transpired between
those two shots. But it could’ve been a hundred, or even a thousand.

It would never break the bond that brought these two men _
a 7-foot-2 black man who is a Muslim and a diminutive white man from Indiana _
together and made them soulmates.

That is the power of athletics. Linked below is a great video of Wooden talking with former players, including Kareem.