Home Featured The Lesson Behind Cowboys’ Release Of Dez Bryant

The Lesson Behind Cowboys’ Release Of Dez Bryant 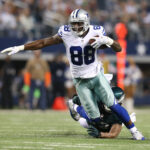 It is going to be interesting to see what the market for former Dallas Cowboys wide receiver Dez Bryant will be. The Cowboys’  first-round draft pick in 2010 was released after eight seasons.

Bryant signed a five-year, $70 million deal in 2014. However, like so many players in the NFL, he never made it to the end of the contract. He had two years remaining on his deal. You may already know the NFL does not guarantee its contracts, although recently the Minnesota Vikings signed quarterback Kirk Cousins to a fully guaranteed deal. It will be interesting if that starts a trend with future free agents.

But that part of this story is for another time.

I am interested to see what teams think of Bryant’s value going forward, and how his reputation for controversy (be it warranted or not) will impact his earning power. Bryant is known for his sideline blowups and lockerrom drama.

Now, teams don’t mind putting up with those type of  antics when you are producing big numbers. But Bryant’s game has been on the decline since he signed his new deal, and at 29 he is on the end side of his career.

I once had a former NFL front office executive tell me that teams will take a slightly lesser talented player over superior player if it will avoid controversy. That is clearly evident in the case of Colin Kaepernick, an above average quarterback in a league starving for quality play at that position.  Of course, Kap’s political beliefs have unfairly kept him out of the game.

Ideally, the NFL would like all of its players to just shut up and play. They don’t want controversy, be it political or otherwise.

So, when a team can get a guy cheaper than you, and comparable in productivity, without the drama, guess who they are going to go with?

Bryant is still a more than capable NFL receiver, but at what cost financially, and in terms of controversy?

My guess is his market value will not be very high. Teams will likely go with a younger, cheaper, and perhaps even a slightly lesser player, than Bryant.

To be sure, he will get a job.  However, Dez Bryant is going to find that his value isn’t nearly what he thinks it should be. And, rightly or wrongly, his reputation for controversy has played a role in that.