Power And Privilege Paved The Way For Nassar’s Monstrous Acts 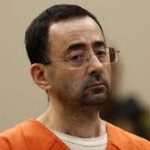 Larry Nassar was sentenced to 175 years for years of sexual abuse.

By Shaquille Hill, For The AfricanAmericanAthlete.com,

The names of all the courageous women who were abused by Larry Nassar, the team physician for USA gymnastics, were not shut down or silenced. They fought, cried, yelled and championed their way to some form of justice. (I say some because the institutions and authority figures that allow male privilege and power are still in place.)

The fallout is far from over. The people responsible for allowing this to happen need to fall from there positions. It’s the only way that a form of trust can possibly happen.

The NCAA is investigating the scandal, but I wonder – what consequences will take place? The comparisons to the Penn State scandal are on, but there are power, economic and social dynamics here. Penn State was connected to football, Michigan State with gymnastics. Everyone knows that the money, ads and media lies in football and basketball – politics and money talk.

I hate to say it, I don’t think the NCAA will be as hard on them as they should. Death penalty should be it, as First Take’s Molly Qerim stated in her Final Take just 30 minutes ago. I can see scholarships, and money paid, but State needs to be forced to wear its shame to the fullest extent.

That means supporters and MSU elite must fall as well. Board of directors, deans, presidents, and coaches -should be charged of willingly staying silent about sexual abuse to people as young as six years old.

According to multiple sources, there were hundreds of complains to Michigan State’s campus police and the Detroit News reported 14 sexual misconduct complains against Nassar under now former president’s Lou Anna Simon. She had the PRIVILEGE to resign – not being fired.

You’d think women would protect women. ESPECIALLY at universities that are SUPPOSED be about “higher education.” Not the case. According to Outside The Lines, Simon hid documents that had sexual assualt complains about Nassar. Federal officials have asked for Nassar-related documents for ten months, according to Dan Murphy of ESPN.

For all of the Me Too’s, Women’s Marches that we have witnessed over the past year – have set us back 100 years. The voices of so many women were silent -until yesterday. What conviction to not only stand up to monsters, but the institutions, money and systems that protect them.

I bring up men, not to dismiss women, but rather to acknowledge our pain and brokenness. I think that once we do that, we can listen to women as well. We can’t fix sexism without fixing toxic masculinity first.

Better yet, we can nip sexual assault in the bud by teaching ourselves, sons, nephews, brothers and friends how to talk about women, how to treat them like human beings, and how to have conversations about male and sexual privilege.
The sexist jokes, the inappropriate touching. It starts early and builds from the ground up. We have to re-educate ourselves and reflect on the harm we’ve done – especially unintentionally.

THIS is why women are afraid of us. We don’t recognize our harm, let alone acknowledge it. And stop sexualizing assault. Think of male predators/ young girls vs how we men look at women/boys with sexual assault for example.)

Fellas, we have WORK to do, PAIN to express, and MUCH to unpack.

To my ladies, keeping pushing, marching, yelling, and screaming for equity. Guys, it’s on us to listen.
Normally, the call for MSU is “Go Green, Go White”. But as long as money, power and silence run amok not only in East Lansing, but everywhere, there is a code of slience and power that colors society in All Black.

(Shaquille Hill is a Michigan based writer. You can read more of his work at https://shaquillehillsports.wordpress.com/)