THE COMPLEX WORLD OF TIGER: SUPERSTAR GOLFER OVERCOMES DRUGS, INJURIES, RACISM AND HIMSELF, TO WIN AGAIN 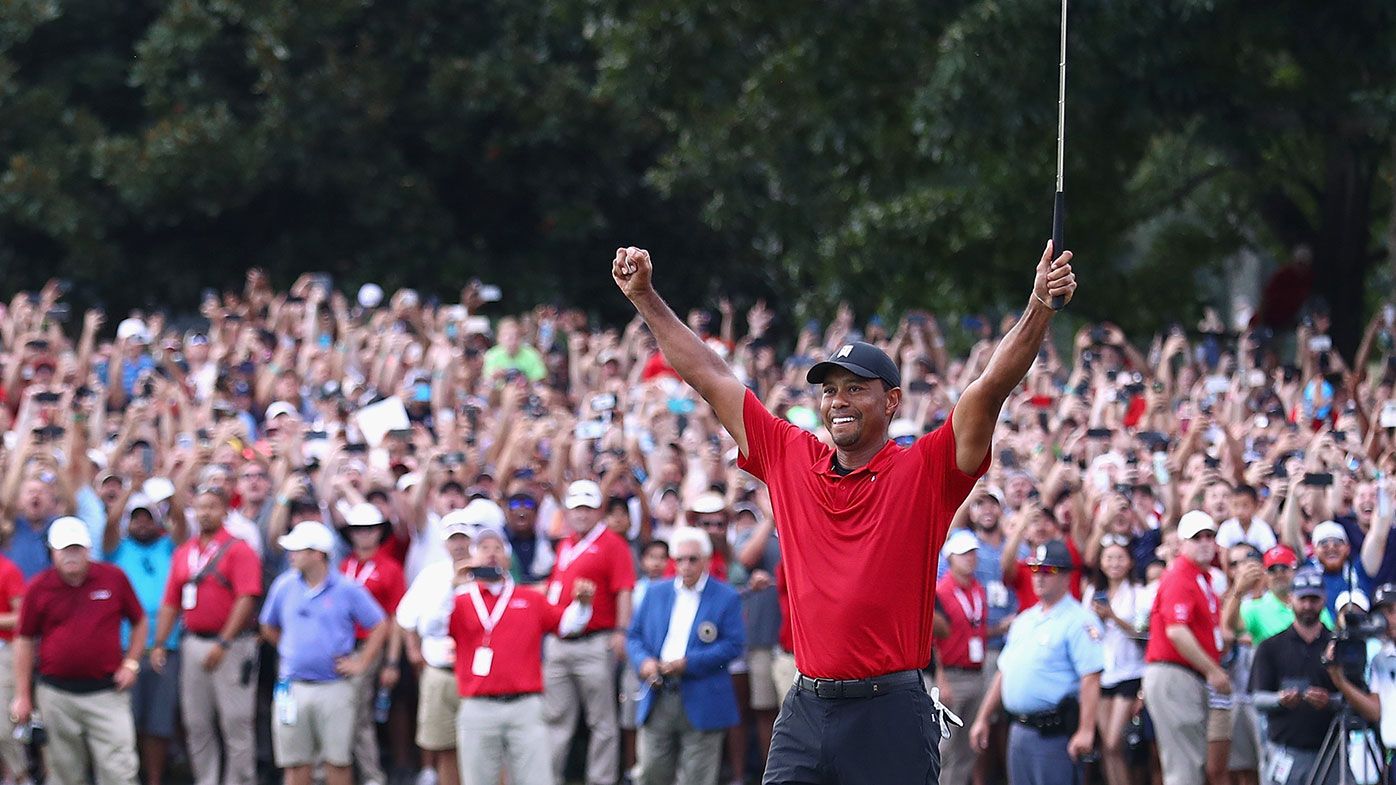 Tiger Woods celebrates his victory at the 2018 Tour Championship.

Love Tiger Woods or hate him for his middle ground approach to life; however, he is simply a product of his environment and upbringing – and aren’t we all?
Many contend that he is not concerned about black issues. I got to meet Tiger when he was a pup in Orange County, California and he was totally focused on golf, not partying, drinking and/or girls for that matter.

Woods, unquestionably one of the world’s greatest golfers, simply was in a personal zone in his early life, and, that is exactly where he needed to be too elevated himself to the level he has in that sport. His single-minded focus and determination were non-wavering.

The result of that single-minded focus is he sprouted into one of the most watched and followed athletes in the world. As a result of his father’s (Earl) guidance and personal history, Tiger did come to appreciate the trailblazers that came before him.

I was there covering the LA Open when black golf pioneer Charlie Sifford was honored for winning the Open back in 1969. There I saw Woods deflect and humble himself to Sifford, Bill Spiller, Ted Rhodes, Pete Brown and all the others, black Tour players  that came after them. Men like, Calvin Peete, Lee Elder, James Dent, and Jimmy Thorpe.

In particular, sharing the podium with Sifford, Woods’ interview clearly showed me he did respect and appreciate the trailblazers.
Recently, Woods did the impossible and won again on the PGA Tour for the first time in more than five years, dating back to the 2013 Bridgestone Invitational. It was his 80th victory on the PGA Tour, now he is only two short of the career record held by Sam Snead.

“Eighty is a big number,” Woods told reporters. “I’ve been sitting on 79 for about five years now, and to get 80 is a pretty damned good feeling.”

The week before Woods’ historic win -which put him in the debate as implementing one of the greatest personal athletic comebacks in sports history -he surprisingly opened up and endorsed Nike’s latest “Just Do It” ad narrated by Colin Kaepernick.
The two-minute ad, which debuted during the NFL opener, highlights superstar athletes LeBron James, Serena Williams, and others, and touches on the controversy of NFL player protests during the national anthem.

“I think Nike is trying to get out ahead of it and trying to do something special and I think they’ve done that,” Woods said at the BMW Championship. “It’s a beautiful spot and pretty powerful people (are) in the spot.”

Kaepernick’s deal with Nike for the 30th anniversary of the “Just Do It” campaign became one of the most polarizing issues in sports, prompting heated debate on several topics including athletes protesting social injustice and Nike wading into political waters.

Of course, hard-core, myopic Americans just simply refuse to try and understand someone else’s realities. In fact, some fans responded to Kaepernick’s sponsorship deal by cutting or burning gear with Nike’s signature swoosh logo and calling for a boycott of Nike products.

To a certain extent, Woods knows what Sifford, Brown, and Spiller went through trying to crack the all-white exclusive sport of golf.
Closing in on his first Masters’ title, a fellow golfer, Fuzzy Zoeller, told reporters to“pat that ‘boy’ on the back and tell him not to serve fried chicken or collard greens next year. Or whatever the hell they serve.” (Who is “they serve?”)

It doesn’t stop there: when Sergio Garcia was asked if he would host Tiger at the 2013 U.S Open, he tossed out that same old, tired racial slur saying “we will have him ‘round every night, and we will serve fried chicken.”

And then there is Hank Haney. He was Tiger’s swing coach for six years and rode the Woods’ train to even more personal success. Then he turns on him after they parted ways writing a book that was not kind to Woods and predicted his comeback was an “epic failure” in 2015.

Worst of all may have been Woods’ caddie of 13 years, Steve Williams. Despondent because Woods let him go, he became Adam Scott’s caddie. When Scott won the Bridgestone Invitational tournament (not a major), Williams claimed it was the greatest win of his career, and he added, “My aim was to shove it right up that black a*s hole.”

Like Sifford, and those after him, Woods knows the deal.

Look at the reaction to Nike’s ad, imagine what would happen to Woods if he was more vocal. He watched Sifford and Spiller and learned how to play the race-game, how to give the stink eye, without giving the stink eye. When Zoeller and Williams played the race card, he stayed cool as a cucumber on the outside.
Basketball and football players do not have to deal with any of the mess Woods has endured inside his sport. Look at how half of America turned on him for his infidelities towards his ex-wife.

Since when did white America care so much about a black man’s marriage? Heck, the present president is on his third wife, and, has been caught on tape disparaging women – yet where is the same outrage?

Woods’ comeback has been an amazing journey that’s been about way more than his almost career-ending back surgeries that at one point had him hooked on pain medication and unable to lift and play with his own kids.

“I do anything and everything I possibly can to help them and guide them and teach them,” Woods said in an ESPN interview. “Golf has taken a back seat to any of that. My health has been the No. 1 thing that’s guided me toward where I’m at because I wanted to be healthy for my kids. I couldn’t play with them anymore. It really sucked to not be able to play soccer with them, not throw a ball around, lay on the floor and play LEGOs … I just couldn’t do it because my back was so bad.”

Woods continued: “The low periods were for the better part of four to six months I had to be helped out of bed every day. There were some days where you’d help me, and I couldn’t stand up. I’d have to just fall to the floor or just stay in bed. Coming back and playing golf was never in my thoughts. It was just, ‘how do I get away from this pain? How can I live life again?’ That was driving my life. I felt like I couldn’t participate in my own life.”

Woods comeback has been about more than golf. Navigating the debilitating back issues, his Dad’s death leaving a giant void, a major swing change, his divorce, and, the ever-present subliminal racism that looms on the PGA Tour and in America has worn at Woods like a termite gnawing on wood.

Tiger’s dad, Earl, once told me that his son would get upset when racism reared its ugly head while an amateur. He guided and counseled his son in how to channel that anger into a better focus on his game.

I can unequivocally insert that Woods’ comeback was far more psychological than it was physical, but that would be a lie. It was equally physical and psychological.
Without Dad to counsel him as America turned on him like he was public enemy No. 1, and without any way to lash back, it surely turned an internal conflict into an external conflict like a calm teapot reaching a violent boil.

Like Earl taught him, Tiger has simply redirected that violent boil into a better focus on what is really important in his life. His kid’s welfare brought him back from addiction and pushed him in his never-ending rehabilitation process, and, winning again in just a byproduct of him finding that long sought-after inner peace. Golf success now is just icing on the cake.

“It’s certainly up there with all the major championships I’ve won,” Woods said. “I didn’t know if this would ever happen again.’’
Leland Stein can be reached at lelstein3@aol.com and Twitter at LelandSteinIII