Home Featured Age Is Just A Number: At 48 Abdul-Rauf’s Offensive Prowess Is Something To Marvel

Age Is Just A Number: At 48 Abdul-Rauf’s Offensive Prowess Is Something To Marvel 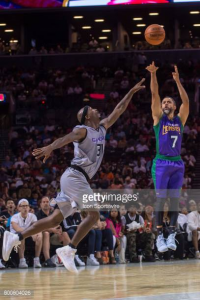 The Big 3 summer basketball league has given us a chance to celebrate Mahmoud Abdul-Rauf’s brilliant offensive skill set once more.

Have you watched Abdul-Mahmoud Rauf play in the Big 3 Summer basketball league? If you aren’t familiar with the Big 3, it’s a 3-on-3 league comprised of eight teams, featuring  former NBA players. Ice Cube, the legendary rapper and actor, formed the league.

Abdul-Rauf  is one of  its most exciting players.  The No. 3 overall pick in the 1990 draft by the Denver Nuggets, is showing that even at 48 he still has something left in the tank.

While he didn’t have the dominate impact in the NBA that he did in college, Rauf was still a solid pro, playing the point guard position, and averaging 15 points per game during his nine year career, that should have been longer. 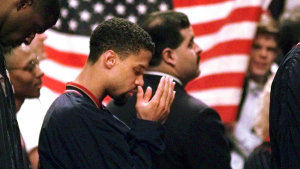 However,  Abdul-Rauf’s legacy is his decision in 1996 to not take part in the playing of the national anthem.  It was his way of protesting the conditions of poor people and people of color in America.  It was a move that many people feel cost him his career as a player in the National Basketball Association.

“When I really look at how it went down, yeah, because I was in my prime, and after the incident, my minutes went down, Abdul-Rauf said in an interview with SLAM magazine. “But you can’t just say, ‘we’re getting rid of him for that’—they had to create an environment where [it was] ‘let’s change his minutes, and let’s mess up his rhythm.

“A lot of things began to happen, so definitely that’s why my career was cut short.”  This is the same thing that is happening to Colin Kaepernick in the NFL. The former 49ers’ quarterback has yet to be signed, despite being an above average player at that talent starved position.

Abdul-Rauf was traded to Sacramento following the ’96 season. He played two seasons for  the Kings, and sat the next two years (’96-’97 and ’97-’98). He was out of the NBA at the age of 28. He returned briefly in 2000 when he played 41 games with the Vancouver Grizzilies.  Check out Abdul-Rauf’s game winner in the ‘3 Headed Monster’s victory over the Power.  The link also includes some interesting words from Gary Payton.  Also, check out the highlight video of Abdul-Rauf’s NBA career.