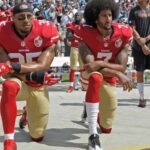 I hope the Cincinnati Bengals go 0-16 next season.

Let me explain why. The way the Bengals are conducting their business this offseason is disgusting.

According to a report in Pro Football Talk, Bengals owner Mike Brown told free agent safety Eric Reid during a recent visit that he planned to institute a no kneeling policy during the National Anthem.

In 2016 Reid joined San Francisco 49er teammate Colin Kaepernick in kneeling during the ‘National Anthem’. Reid is protesting justice and inequality in America.
Reid continued his protest last season, while Kaepernick, one of the NFL’s better quarterbacks, was not signed by a team. The decision to not sign Kaepernick was clearly push back from the NFL’s white ownership.

And now, Reid, 26, a starter at safety for five seasons since being drafted in the first-round out of LSU, seems to be getting the Kaepernick treatment.

The Bengals were the first team to invite him in for a visit. They obviously had no intentions of signing him, but only wanted to make a point.

According to PFT, Brown “initiated discussion regarding the issue of kneeling” and “the conversation almost exclusively centered on the topic.” Bengals owner Mike Brown reportedly told Reid that he planned to institute a ‘no kneeling policy’ next season, and then asked Reid how he felt about that.

In a perfect world it would be nice if future free agents look at how the Bengals disrespected Reid, and pass on partnering to do business with them. After all, any thoughtful person would have to wonder why he would want to invest his God given talents in a team as hypocritical as the Bengals are.

After all, this is the franchise that has put up with the antics of cornerback Pacman Jones, whose career is littered with incidents on and off the field, undisciplined play of linebacker Vontaze Burfict, and drafted Joe Mixon, the guy who cold-cocked a woman while he was at Oklahoma.

So, the Bengals can deal with all those issues, but they don’t want a fine player, who is a model citizen, and thoughtful person, who cares about justice and inequality.
No wonder this team hasn’t won a playoff game in forever.