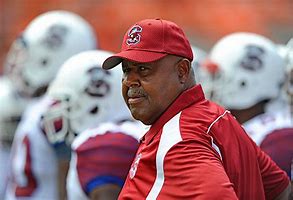 Coach Buddy Pough moved into a tie atop South Carolina State’s victory list in high style Saturday. The Bulldogs had their most productive offensive game of the season, rolling up 452 yards total offense en route to a 38-24 road win against MEAC foe Delaware State.

The victory gives Pough 129 wins at South Carolina State and ties him with Willie Jeffries, his mentor, for the top spot.

“It feels good to get a win especially in conference,” Pough said. “I don’t think much about the record. I appreciate all the support, but it’s so many people that had a hand in reaching this milestone.’’

Quarterback Tyrece Nick had the biggest hand in Pough’s milestone win. The junior completed 16 of 28 passes for 253 yards and a school-record five touchdowns, and he rushed for another 105 yards on 14 carries.

“I thought Tyrece played outstanding tonight despite a few mistakes,’’ Pough said. “We just have to make some adjustments moving forward and correct some minor mistakes.’’

South Carolina State’s defense had a strong performance, holding Delaware State (1-4, 0-3 MEAC) to 291 total yards, including just 93 on the ground. The Hornets contributed to their demise by committing 11 penalties totaling 103 yards.

Alcorn 35, Alabama State 7 – The Braves waited out a four-hour lightning delay before kicking off their SWAC East showdown with the Hornets in Montgomery, Ala., and then struck with lightning-like suddenness en route to a lopsided victory.

Alabama State (2-3, 1-1 SWAC) was looking to establish itself as a serious contender to unseat the five-time defending East champs as the top team in the division.

But the Hornets found themselves on the short end of a 14-0 score 10 minutes into the contest. They were out the game, down 28-0, at the half.  Alcorn enjoyed a 239-64 advantage in total yards in the first two periods, including a 156-0 edge in rushing yards.

Alcorn quarterback Felix Harper threw pair of touchdown passes, an eight-yard toss to LeCharles Pringle and an 18-yard strike to Niko Wood, and scampered 18 yards for another score. Niko Duffey bolted 67 yards for a touchdown to round out the first-half scoring for the Braves.

Duffey finished the game with 101-yards on nine carries. In addition to its offensive outburst, Alcorn forced four turnovers in the first half.

Alabama A&M (4-2, 1-1) led most of the game before Texas Southern (0-5, 0-2 SWAC) battled back from a 28-13 third-quarter deficit and tied the score with 11:57 remaining. Quarterback Devin Williams’ 40-yard touchdown pass to Ke’Lenn Davis and a two-point conversion knotted the score.

Texas Southern won the coin toss to begin the overtime period and elected to play defense. Glass connected with Ibrahim on a third-down play from the 12 for what proved to be the winning score. Glass completed 28 of 38 passes for 377-yards and four touchdowns in the game.

Florida A&M 28, North Carolina Central 21 –Quarterback Ryan Stanley capped a stellar performance with a touchdown pass with 32 seconds on the clock to lift the Rattlers to a home MEAC victory.

Stanley entered game needing 336 yards to pass Quinn Gray atop the Florida A&M career list for passing yards. He finished the game with 306 yards while completing 22 of 32 throws. Stanley had four touchdown passes, including two tosses to Xavier Smith that won the game. It was Smith’s second touchdown catch of the game. He finished the contest with nine receptions for 129-yards.

Stevie Green, RB, Fayetteville State – Rushed for 187 yards and three TDs on four carries in a 66-20 win against Chowan.

Kevin Dominique, RB, Grambling State – Rushed for 129 yards and two TDs on 10 carries in a 44-21 win against Jackson State.

McKinley Habersham, RB, Albany State – Rushed for 127 yards on 21 carries in a 21-0 win against Tuskegee.

Akevious Williams QB, Bethune-Cookman – Rushed for 114 yards and one TD on 13 carries and threw three TD passes in a 31-20 win against Morgan State.

Johnnie Glaspie, RB, Fayetteville State – Rushed for 112 yards and one TD on four carries in a 66-20 win against Chowan.

Dejerric Bryant, RB, Mississippi Valley State – Rushed for 109 yards on 14 carries in a 31-23 win against Virginia-Lynchburg.

Terraris Saffold, RB, Central State – Rushed for 107 yards and two TDs on 27 carries in a 28-21 win against Edward Waters.

Donnie Corley, WR, Texas Southern – Caught eight passes for 104 yards and one TD in a 35-28 loss to Alabama A&M