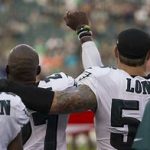 Chris Long and Malcolm Jenkins (fist raised) are two of the Super Bowl champion Eagles who had no intentions of visiting the White House.

If it helps him sleep better at night, Donald Trump can keep telling himself he cancelled the Philadelphia Eagles’ White House ceremony recognizing their Super Bowl championship. But we all know better. The players, not Trump, called this thing off long ago.

With fewer than 10 players expected to be on hand, the White House, fearing the dreadful optics of the lack of RSVPs, and an attempt to save face, put out a statement trying to spin the contempt for Trump into the players disrespecting the country.

“The Philadelphia Eagles are unable to come to the White House with their full team to be celebrated (Tuesday). They disagree with their President because he insists that they proudly stand for the National Anthem, hand on heart, in honor of the great men and women of our military and the people of our country.”

This, of course, is the lie constantly perpetuated by the White House, Trump, his supporters and — given the league’s new anthem policy — NFL owners.

The players, following the lead of Colin Kaepernick, the former (?) NFL quarterback have been silently kneeling during the national anthem to protest police brutality and racial inequality. The protest has nothing to do with the flag, the troops or lack of love of country. But in order to avoid the real reason for the protest, those against them portray them as ungrateful “sons of bitches” as Trump so delicately called them during a campaign stop in Alabama last year.

The statement went on to reason that since the Eagles were sending such a smaller group, it was killed because “the 1,000 fans planning to attend the event deserve better.”

You know who deserves better? People being killed seemingly indiscriminately by police, those who are subjected to racial injustices, and the NFL players, who are having their character assassinated with impunity for exercising their right to peacefully protest. As for those 1,000 fans not getting a chance to see Trump belch some ham-handed sports/government joke, or make their Super Bowl win about him, boo frigging hoo. It’s bigger than the was-never-going-to-happen-anyway ceremony.

Whatever glimmer of hope more players would attend probably was killed two weeks ago in Atlanta. At the owners meeting, the group collectively crafted their anthem policy that requires players to stand during the anthem if they are on the field or remain in the locker room as an option — which pretty much identifies those among the latter as un-American.

Granted, it was a united front with owners like Chris Johnson of the New York Jets offering to pay any fines players incur for their protests.

This was a botched attempt by the owners to show power and an awful PR move. And it is a naked attempt to make sure fans who have bought into the flag/military narrative don’t do away from football. Chris Long of the Eagles saw it as “fear of a diminished bottom line.”

This only emboldens the players to the point where the formerly ridiculous notion of players sitting out games until Kaepernick and Eric Reed are on rosters. That may be an extreme, but it is no longer implausible.

This is going to only get uglier as long as Trump and the NFL owners remain deliberately obtuse. And they can both continue dealing with the specter of facing White House ceremonies too small to field a defense or offense.