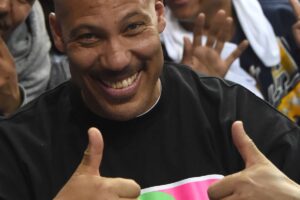 You are either a fan of LaVar Ball _  the father of UCLA’s Lonzo Ball, and brothers Li Angelo and LeMelo at Chino Hills (Calif) High School _ or you aren’t.

His self-promoting bravado of his kids either turns people on or off.

A recent story in For The Win  details Ball’s constant intrusion with the Chino Hills High School basketball team. It talks about Ball calling plays from the stands, and going into the lockeroom at halftime to confront the coach. For some reason, Ball  thinks because his sons are key players on the team, and his other son is a star at UCLA, that he knows all there is to know about basketball, and can say and do anything.