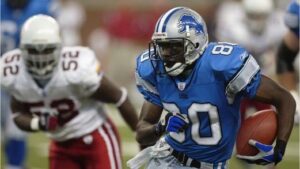 There are lessons to be learned from Charles Rogers tragic NFL career.

By Rickey Hampton, Editor and Founder of  The African-American Athlete

A lot of people will tell you that Charles Rogers is the biggest bust in NFL draft history. And honestly, he just might be.

Rogers was the No. 2 overall pick by the Detroit Lions in the 2003 draft out of Michigan State. I had an opportunity to cover Rogers during his high school career in Saginaw, and at MSU. Standing 6-foot-4, Rogers was an electric player, with great hands and dazzling, sprinter’s speed. In high school he was a man among boys. In college, he was quite simply the best player in college football. At every level he ever competed, including the NFL, Rogers was the best athlete on the field.

In his first game as a professional Rogers caught two touchdown passes, and seemed destined for superstardom. Sadly, his first game would be the highlight of his career. Practically everything from there went downhill. Injuries and drug abuse had him out of the NFL following the 2005 season. Rogers played in only 15 games, and caught 36 passes and scored four touchdowns. He lost millions of dollars, and untold millions worth of future earnings. working in Florida as the general manager at a used car lot. In an emotional interview with a local television station, Rogers looks back at what might have been. His story is one that should be told to every young person.