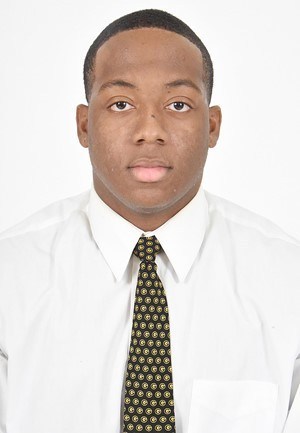 Jalen Heath juggled the demands of athletics and academics perfectly during his baseball career at Grambling.

Jalen Heath has never been much of home run hitter throughout his baseball career at Grambling University, but the infielder has consistently knocked it out of the park in the classroom.

The Colorado Springs, Colo., native graduated with a 3.98 cumulative grade point average _ he made just one B during his academic career at Grambling State _ and was the Valedictorian of the Class of 2019.

“That was huge,’’ says Heath. “Coming into college, I had a goal that I had set for myself. I wanted to get a 4-0, make all A’s. Granted that didn’t happen. I got one B. But all the hard work. I am very grateful for the honor.’’

Heath, a Business Accounting major, attribute his quest for academic excellence to his parents.

“My father and mother instilled it in me at an early age,’’ he says. “My parents were hard on me growing up. They knew what I could do in the classroom. Whenever I slipped up in (in the classroom) middle school and high school, they would be on me.’’

Heath’s father, Noland Heath, was especially demanding of him. The elder Heath told his son stories about how his parents worked to pay for him to attend Michigan State and how difficult that had been on them.

“He really cherished academics,’’ the younger Heath says, “and he stressed that to me, and how being an athlete can take you some places but having a degree is something no one can ever take away from you.’’

Heath says maintaining a high-grade point average was satisfying, but it came with a price.

“It was very difficult, ‘’ he says. “Being a student-athlete has a lot of responsibility in the classroom as well as on the field. You have workouts, early mornings in the weight room and you practice for a couple of hours a day.

” You have games during the season and road trips. It was very difficult to maintain doing all those things. The key was meeting with teachers and making sure I had a plan but it was definitely a tough thing for sure. ‘’

How was Heath able to have so much success?

“The biggest thing was having a plan of action for each day,’’ he said. “I had to set out a plan where if I knew I had to get up early today and do this later, I was going to do my homework and study at this time.

“I even missed out on the weekends and some the stuff regular students were able to do. I had to miss out on that so I could catch up on my homework and things like that.

Heath’s only B is seared in his memory. It was in an Accounting III class during the first semester of his junior year.

“I did all I could do in that class,’’ he says. When I got the B, it made me pretty upset but it made me better as a student. It made want to work harder and make sure it never happened again.’’

Heath delivered the valedictory speech to 400 members of the Class 0f 2019. He is one of only a few Grambling athletes to earn that honor.

“I wasn’t too nervous,’’ he says. “Leading up to the day and writing the speech I got a little nervous. Sitting on the stage the day of [graduation] and looking out into the crowd with all eyes on me was pretty nerve-wracking.’’

To break the ice, he told the audience that he had written a nice speech to read from, but he got caught in the rain en route to the Fredrick C. Hobdy Assembly Center and the manuscript got wet. It was illegible so he would have to wing it.
That drew laughter, and from that point on everything went well.

Heath had a limited role on the Tigers’ baseball team. He only played in one game during the 2019 season. But he prided himself in being ready to if he were ever called on.

“I was always in the dugout, being a good teammate,’’ he says “I was there waiting for the moment. I knew I was ready.’’

“We always talk about recruiting student-athletes,’’ Cooper says. “When you get a guy who is sharp in the classroom it makes it that much easier to coach him on the field. He seems to always be prepared. He ‘s always attentive being valedictorian goes to show you can juggle many different things and still be on top of your game academically.

“I wish I could take a lot of credit for helping him since he’s been here,’’ Cooper says. “Jalen was one of the closest things to a finished product that you would like to recruit coming from the family he comes from.

“They did a great raising him. They made it easy on us to manage him, just put him in position to be successful in the classroom and off the field.

“Jalen is a guy who never missed a weight room attendance, was never late for practice and never missed a practice. The work ethic he had as an athletic goes to show he had it in the classroom as well.’’

Heath landed at Grambling in a roundabout way. His high school coach and Cooper were discussing one of Heath’s teammates at Discovery Canyon High, and baseball in general when Heath’s name came up.

Heath knew nothing about HBCUs in general and the G-Men’s program in the program, yet he signed with them.

“At the time I didn’t realize the nature of what I was doing coming to an HBCU,’’ he says. “Looking back on it, I’m happy I made the decision. Growing up in Colorado, all my life I was always the only one, or one of a handful of African Americans.

Heath’s goal is to become the Chief Financial Officer in the business world and eventually work in the front office of a Major League Baseball team.

Cooper says he can see that happening. He frequently jokes with Heath’s teammates who are not as punctual as he is that he’s going to be their boss one day, and he’s going to fire them for being late.

“I expect him to be the CFO of Fortune 500 company before it’s all said done,’’ Cooper says. “I believe he’ll be a vital organ for whoever hires him.’’

Roscoe Nance is a veteran sportswriter with more than 40 years of experience. He was a member of the USA TODAY sports staff for 21 years before retiring in 2007. He also wrote for The (Columbus, Ga.) Enquirer and The (Jackson, Miss.) Clarion-Ledger newspapers during his career. He currently is the co-host of Express Yourself With T-Ramone & Sco with veteran sportswriter Tim Turner on Blog Talk Radio and TheAfricanAmericanAthlete.com