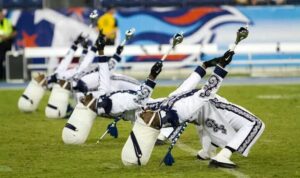 TSU’s mighty Aristocrat of Bands has a rich history of giving great performances.

This is a serious old school classic. A 1973 performance of the fabulous Tennessee State University ‘Aristocrat of Bands’ at halftime of an Atlanta Falcons game at the old Fulton County Stadium. The Aristocrat are under the leadership of Band Director Clifford Watkins, and they put on quite a show in front of what looks to be a sellout crowd.

The video is about as good as you are going to see from something recorded more than 35 years ago. What is great about this film is that you can see how the roots of what bands did all the way back then are alive, and well, today.

It is something I think all fans of HBCUs will enjoy. One other note that TSU fans will enjoy: As the band comes off the field, you can see Atlanta’s No. 87, Claude Humphrey, the former TSU great, who would later be inducted into the Pro Football Hall of Fame.