How Julius Became ‘The Doctor’ 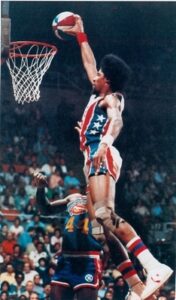 Julius Erving carried the ABA, and help bring interest back to the NBA, with his incredible style and showmanship.

Julius ‘The Doctor’ Erving is arguably the most exciting player in the history of basketball. He turned the dunk into an art-form. Standing 6-foot-6, and with huge hands, Erving was able to handle the ball easily in his hands, as if it were a grapefruit. That allowed him to manipulate and maneuver the ball around, while he was in the air, with ease.

Those who were fortunate to see him play early in his career in the ABA watched an absolutely extraordinary player, who was breathtaking in the open court. It is a tragedy that so much of that footage is missing.”

Of course, we have all seen enough of his career highlights, like the ‘Rock the Baby’ dunk over Michael Cooper of the Lakers, and his dunk over 6-foot-11 Bill Walton of the Portland Trailblazers to know of his greatness.

But, how did Julius Erving become Dr. J.?

Check out this video from famed Rucker Park in Harlem, N.Y., where all the basketball legends have played.