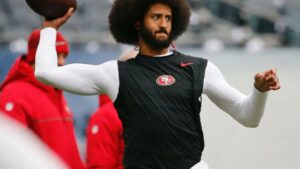 Free agent quarterback Colin Kaepernick would seem to have a strong case if he decides to sue the NFL for collusion.

But if Sunday’s reports are true, the former San Francisco 49ers quarterback just made his feelings known loud and clear. Kaepernick, who has not been able to land a job with a team, is reportedly filing a grievance against the NFL for collusion. He has reportedly hired famed attorney Mark Geragos to represent him.

According to a Sports Illustrated legal expert the definition of collusion is:
“Collusion occurs when two or more teams, or the league and at least one team, join to deprive a player of a contractually earned right. Such a right is normally found in the collective bargaining agreement signed by a league and its players’ association.”

“For example, the right of a free-agent player to negotiate a contract with a team cannot be impaired by a conspiracy of teams to deny that a player a chance to sign.”

If ever there is a classic case of collusion, this is it. It is without question that Kaepernick is imminently qualified to play in the NFL.  He is an established quarterback, with 85 total touchdowns and nearly an impressive 88.9 quarterback rating.

However, owners have made the decision to not employ Kaepernick based on his decision to kneel during the national anthem last season.  That is even though Kaepernick has made it clear his issue isn’t the flag, but the injustice and police brutality people of color have faced in America.

Kaepernick’s actions have started a movement in athletes and activism that has gone world-wide. Of course, his critics, including the current man who lives in the White House, who called Kaepernick a “Son of a bitch” have turned the issue into a culture war.

The NFL owners have followed suit. Even with a rash of injuries and ineffective play at the position throughout the league, Kaepernick, 29, and a six-year veteran, has not gotten an opportunity.

NFL owners may think they are punishing Kaepernick by keeping him out of the league. But it looks like they will have to deal with him, anyway. And it could turn out to be very costly.