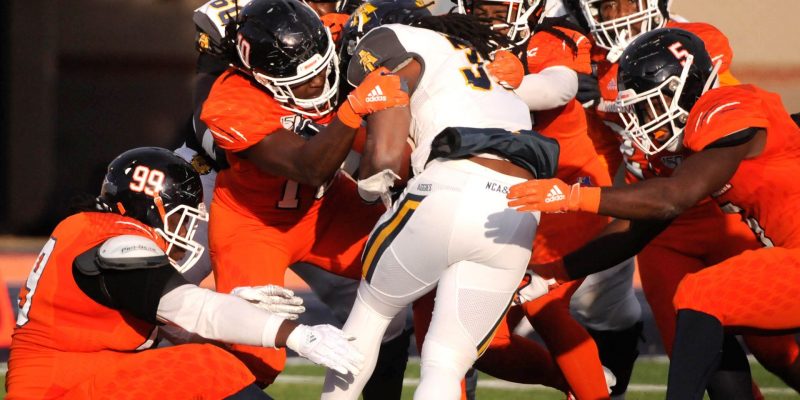 Morgan State played giant killer for the second straight year and threw the MEAC championship race into a mad scramble with 22-16 a home victory Saturday against North Carolina A&T State.

Harris scored the clinching touchdown on a one-yard run with 3:327 remaining in the game. Harris’ touchdown capped a 13-play, 91-yard drive that made the score 22-13. Noel Ruiz kicked a 46-yard field goal with 1:20 left for North Carolina A&T’s final points.

The Aggies recovered an onside kick following Ruiz’s kick, but quarterback Kylil Carter threw three incomplete passes and was sacked for a seven-yard loss to end the game.

Miles 20, Tuskegee 6 – The Golden Bears cruised to a road victory to wrap up their second consecutive SIAC West Division title while spoiling the Golden Tigers’ homecoming. Miles (8-2, 5-1 SIAC) will host Albany State in the conference championship. It will be the fifth time the teams have played each other in the title game since it was first played in 2011. Tuskegee (5-5, 4-2 SIAC) had a statistical advantage against Miles, outgaining the Golden Bears 349-249. But the Golden Tigers were able to convert the yardage into points.

Grambling State 19, Alcorn State 16 – Miquel Mendez kicked a 45-yard field goal to give the G-Men a home win and tighten the SWAC division races. Grambling and Southern each have to conference losses in the West Division as they look ahead to their Thanksgiving weekend showdown in the Bayou Classic. The loss was the first in conference play for Alcorn. Alabama A&M, Alabama State, and Jackson State, each with two conference losses, are chasing the Braves. Alcorn defeated Alabama State earlier in the season. The Braves face Alabama A&M Saturday and close the season against Jackson State Nov. 23.
Top Performances

Corderal Cook, QB, Virginia State – Accounted for 315 yards total offense and one TD in a 27-24 win against Virginia Union.

Brandon Lawler, RB, Kentucky State – Rushed for 139 yards and one TD on 10 carries in a 34-28 win against Central State.

Stevie Green, RB, Fayetteville State – Rushed for 122 yards and one TD on 25 carries in a 31-17 win against Winston-Salem State.

Jordan Jones, WR, Prairie View A&M –Caught six passes for 119 yards and one TD in a 37-20 win against Arkansas-Pine Bluff.

Justin Smith, WR, Norfolk State – Caught four passes for 106 yards and one TD in a 38-21 win against North Carolina Central.