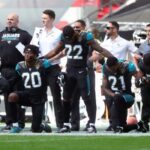 NFL owners have instituted a new rule that prohibits players from kneeling.

“Shut up and play.” That is essentially what the National Football League told its players on Wednesday with its decision to require players to stand during the playing of the ‘Star Spangled Banner.’ In a statement the NBA said:

The hypocrisy behind all of this, of course, is the fact the rule goes against the very freedoms the American flag stands for. Even more so, this is the same league that is punishing former 49ers Colin Kaepernick and Eric Reid for their peaceful demonstrations by ‘whiteballing’ them. That type of practice goes against the values the flag represents. And commissioner Roger Goodell will get to play king and determine what is disrespectful to the flag and not.

There is a reason there is not a public sector job in America that requires its employees to stand for the playing of the anthem. And if there are, those employees who choose not to stand have every right not to do so.

Now,  there is no real reason for the playing of the Anthem before the start of a football game, other than the multi-million dollar contract the armed forces has with the NFL.  By requiring its players to stand during the anthem the NFL is forcing its political beliefs down the throats of its players.  It is really hard to imagine this could even be taking place until you consider the current state of America, where a racist and a pathological liar at that, is the president.

The National Football League Players Association (NFLPA) followed with a terse response that pointed out how they had no input in the new rule:

NFLPA Statement on New Anthem Policy: The NFL chose to not consult the union in the development of this new “policy.” NFL players have shown their patriotism through their social activism, their community service, in support of our military and law enforcement and yes, through their protests to raise awareness about the issues they care about.

The vote by NFL club CEOs today contradicts the statements made to our player leadership by Commissioner Roger Goodell and the Chairman of the NFL’s Management Council John Mara about the principles, values, and patriotism of our League.

Our union will review the new “policy” and challenge any aspect of it that is inconsistent with the collective bargaining agreement.

With the current Collective Bargaining Agreement (CBA) up in 2021, you can bet this issue will not go quietly. The NFL owners shortsightedness on this issue speaks to the stunning lack of diversity there is among the 32 teams. All are white, with the exception of Jacksonville Jaguars owner Shahid Khan. They are far removed from the issues of racism and injustice that many of these athletes, who are mostly black, are addressing.

The mostly white rich men think that NFL players shouldn’t have this issue because they are wealthy, too. Of course, racism doesn’t just include poor black people, it includes all black people, ask Sterling Brown of the Milwaukee Bucks, who was tased by police.

Consider the racial hatred former President Barack Obama endured during his eight years in office. If the president of the United States can’t escape racism, how could you think a wealthy pro athlete can.

What these rich white men don’t understand is that our blackness is too often the first thing people see, and the freedoms they have taken for granted as being white Americans are nothing like the challenges that have faced Black America. It’s not like these professional athletes want to put themselves on the line by speaking out, they feel they have to speak out.