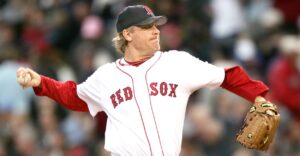 By Rickey Hampton,  Editor and Founder of  The African-American Athlete

I find it absolutely incredulous, but not surprising, that some people don’t believe that Baltimore Orioles outfielder Adam Jones was showered with racial slurs on Tuesday at Boston’s Fenway Park.

One prominent voice is former Red Sox pitcher Curt Schlling. He said Jones lied, and that he is ‘full of sh$t.’ Of course, that should come as no surprise from Schilling, a staunch conservative, who is also anti-Muslim.

Why would Schilling, and others, even doubt Jones?  To hear these voices question Jones reminds me of all the years blacks talked about police abuse, and no one believed it until technology shed a light on it.

Why does a black man need proof to make such an allegation? Does Schilling think black people bring up these issues of race for sport? Why in the hell does anyone even consider that out of the blue, Adam Jones would decide on Tuesday, May 2nd, he would make up some stuff about being called a ‘nigger’ by some likely intoxicated, white boys at Fenway Park?

As Jones said, it was not the first time, and I will say it won’t be the last time. So, really, this is nothing new. It’s a daily part of life for black people, especially those who have excelled in life. President Obama dealt with it, so have Venus and Serena Williams and golfer Tiger Woods. Many of you who are black and are reading this have dealt with it.

When blacks excel at high levels there is always going to be some disgruntled unfortunate beings there to throw some shade his/her way.

Boston has a disgusting history in regards to racism. Bill Russell, who led the Celtics to 11 NBA titles called the city a ‘Flea market for racism.’ The Red Sox passed on drafting Willie Mays because he was black, and Boston Bruins fans have used racial slurs at black players. In 1974 there were riots when the city tried busing students in order to desegregate schools.

Nonetheless, to call the entire city of  Boston racist, is akin to calling all black people criminals. What happened at Fenway Park could happen any place, at any time.

There is an entire segment of society embolden by the racist dog whistling Donald Trump rose to power on. Schilling, who has talked about the possibility of running for elected office, knows such a statement about Jones feeds the racist segment of the republican party. Oh, yes, there is a racist segment of the republican party. It is not a coincidence that some of Trump’s biggest supporters are the Klan and other white nationalist groups.

What people like Curt Schilling are really upset about is the fact that black and brown people in America finally have a voice. Now, when people go over the line they get called out. I certainly believe what Adam Jones said. Racism is alive and well in America. You have to look no further than 1600 Pennsylvania Ave to see that.