Oakland and Pittsburgh have traditions that extend beyond their great NFL rivalry.

By Michael Roberson, For The African-American Athlete

The cities of Oakland and Pittsburgh both just had celebratory parades after their respective major pro sports teams won world championships, and have many similarities that are historically, culturally and competitively connected.

The Golden State Warriors won the 2016-17 National Basketball Association Finals, after defeating the defending champion Cleveland Cavaliers 4-1.  That title gives the city of Oakland two NBA rings in the last three seasons, and a total of three trophies (1975, 2015 & 2017) over 40+ years for the East Bay residents.  The first one won in the Bay Area was historic, because Al “The Destroyer” Attles was the second (Bill Russell) African-American head coach to win the NBA championship. 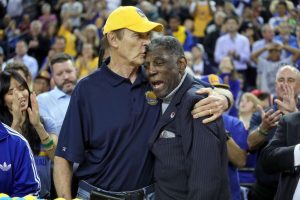 In 1975 the Warriors captured the NBA title with Rick Barry and coach Al Attles leading the way.

To be fair, the Oakland Oaks of the American Basketball Association, also brought a pro basketball championship to Alameda County (1968-69).

On the other side of country, the Pittsburgh Penguins won their second consecutive National Hockey League Stanley Cup Championship, and fifth overall in 26 years.

To be fair to Western PA, since they don’t have an NBA team in Allegheny County, we have to acknowledge the Pittsburgh Pipers, the inaugural champions of the ABA (1967-68), coincidentally a year before the aforementioned Oakland Oaks.

Through the magic of  “Hollywood,” the mythical Pittsburgh Pisces won the championship in the 1979 cult film, “The Fish That Saved Pittsburgh,” led by Moses Guthrie (Julius Erving).  The team was originally named the Pythons, but changed to the zodiac sign of the fish when the entire team fit that astrological criteria.

The slogan, “Just Win Baby,” coined by the Late owner Al Davis, applied to the Raiders organization three times for Super Bowl (XI, XV & XVIII) wins, but only two in Oakland.  The other trophy was earned as the Los Angeles Raiders.

Now the Raidernation is expected to take another nomadic journey in a few years, this time to “Sin City,” to become the Las Vegas Raiders. 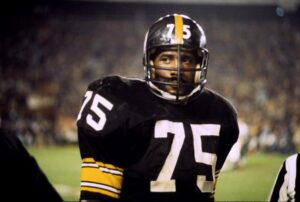 Pittsburgh’s Mean Joe Greene is a symbol of the Steelers strength, power and dominance.

As for the pro football team that plays in the City of Bridges, they have the most Super Bowl victories (six) in National Football League history (Super Bowls IX, X, XII, XIV, XL & XLIII).  The Pittsburgh Steelers also had some classic battles with the Oakland Raiders, including the infamous “Immaculate Reception” that may have started the 1970’s Dynasty, cementing themselves as arguable the greatest team ever.

The Oakland Athletics, to whom the Raiders share the Oakland Coliseum with and neighbors the Warriors,  have amassed four World Series titles (1972, 73, 74 & 89), including three in a row, and one during the big Loma Prieta earthquake.

The Pittsburgh Pirates produced five World Series trophies (1909, 25, 60, 71 & 79) over a 70-year period.  The last two titles were more significant because the 1971 team was the first to field an all black/minority lineup, while the 1979 “We Are Family” bunch had a large African-American and Afro-Caribbean contingent too.

The Three Rivers city was also an integral region for Negro League Baseball, as the Pittsburgh Crawfords and Homestead Grays both won multiple league titles.  The prolific Grays won three Negro League World Series championships (1943, 44 & 48).  The latter team had a plethora of stars and Hall of Famers:

Both cities on each side of the nation had important moments in African-American history too.

The Raiders have the distinction of hiring the first A-A head coach (Art Shell) of the modern era in 1989.  Although at the time of the pioneering moment, the team was playing in Los Angeles, but rehired the Silver & Black’s legendary lineman in 2006, back upstate in Oakland. 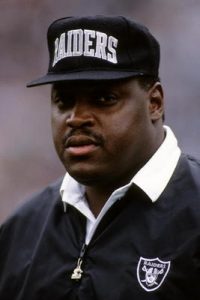 The Pittsburgh Steelers are the originators of the “Rooney Rule,” which mandates that African-Americans or other minority candidates are included in the interview/hiring process whenever there is a coaching vacancy.  Mike Tomlin became the second black head coach (Tony Dungy) and youngest overall to win a Super Bowl title in 2009.  This may or may not have been a result of the inclusive rule, but Tomlin has more than proved that he is a high caliber coach, despite Terry Bradshaw feeling the contrary.

The Alameda County pro baseball team also had a batboy/clubhouse assistant that later became an international superstar Grammy Award winning rapper/entertainer.  Stanley Burrell, aka M.C. Hammer, absorbed a great deal of knowledge from that experience, and was said to have resembled MLB luminary, Hammering Hank Aaron; hence the nickname that carried him all around the world.

Although the Pittsburgh Pirates didn’t have any Black Aces on the championship teams of the ’70’s, they did have two 19-game winners (Doc Ellis & Jim Bibby) both of whom had at least one no-hitter too.  Ellis famously clamed he was on LSD when he threw his pitching gem in 1970, while Bibby tossed his in 1973, and was the brother of former NBA star, Henry Bibby, and uncle of ex-NBAer, Mike Bibby.

Both cities were popular destinations during the “Great Migration” of African Americans from the South.

Racial strife and alleged police brutality is why Huey Newton and Bobby Seale formed the Black Panther Party in Oakland over 50 years ago.  Later the infiltration of drugs and crime put the port city into a tailspin.  Alameda County’s Seat has always felt like a step-child to the perceived more sophisticated San Francisco on the other side of the bridge, possibly due to the demographics of “The Town.”

Even though Oakland can lay claim to having won multiple titles in different sports, they still have never had the honor bestowed upon them to be called/named the Oakland Warriors, despite winning three NBA championships as a tenant in that locale on the East Side of the Bay.

Now with the Raiders heading to Las Vegas, and the Warriors eventually moving back to San Francisco, Oakland will become a one-team town, similar to the state capital, Sacramento (Kings) and San Diego (Padres).

Besides all the racial tension going on in Pittsburgh during the Negro League days, two incidents stand out in the midst of  the championship years.

Tennessee State University legend, Joe Gilliam, was the starting quarterback for the Steelers during the 1974 season, but was subsequently benched after six games.  Terry Bradshaw took over, and the rest was history (4 SB wins).

The reason why he was demoted has several different answers.  Many feel it was racially motivated by the fans and public not wanting to see a black QB lead their franchise to an eventual Super Bowl.  The team, of course, felt his performance (4-1-1) was lacking, while others blamed his apparent drug usage.  It would be another 13 years before a black quarterback (Doug Williams) started in and won a Super Bowl (XXII).

Dave Parker won two batting crowns (1977 & 78), the 1979 All-Star Game MVP, and the ’79 World Series title, elevating him to superstar status.  This contributed to the “Cobra” becoming the first $1M/year athlete in pro sports; however, there was backlash that followed that monumental achievement.

His own–loosely termed–fans started throwing items at him from the stands, including bolts, bullets, and batteries.  Was this an act of racist behavior by individuals jealous of a black man with a lofty economic stature?  Parker eventually left Pittsburgh for Cincinnati, to play for his hometown Reds.

The ‘Burgh also had their own Rap star (Wiz Khalifah), as he put the city on the music map with his hit anthem, “Black and Yellow,” which represented the colors of all three teams, and the Steelers Nation really embraced.

Just to exemplify even further how the two regions are connected, there is a city named Pittsburg in the Bay Area, while the neighborhood that encompasses the University of Pittsburgh is called Oakland.

Oakland and Pittsburgh are two Mid-sized cities with three major sports teams within their own city limits.  They are and will be connected for years to come, but as for the Summer of 2017, they are both, The Cities of Champions!