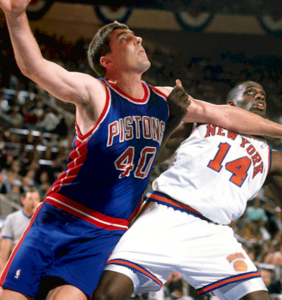 Players like Bill Laimbeer of the Pistons and Anthony Mason of the New York Knicks epitomized the rugged play of the NBA in the 90s.

If you are not a Detroit Pistons fans, you probably hate Bill Laimbeer. The 6-foot-10 center was part of the vaunted ‘Bad Boys’, who terrorized the NBA in the mid 80’s and early 90’s with a physical brand of basketball that some people deemed dirty. They beat down Michael Jordan and the Bulls early in his career, and took down the mighty Celtics and Lakers.

With the brilliant Isiah Thomas leading the way, along with Joe Dumars, Dennis Rodman, Vinnie Johnson and later, Mark Aguirre, the Pistons won back to back NBA titles in 1989-90. Laimbeer, teamed with Rick Mahorn as the most physical (and dirty in the eyes of some) post players in the NBA during much of that run.

Recently, Laimbeer was a guest on ‘The Rematch’, with former NBA player Etan Thomas. Like him or not, Laimbeer has a lot of interesting things to say. Click for the interview. Also linked is a video feature on how the Pistons became the ‘Bad Boys’.