Pro Football Hall Of Famer Cortez Kennedy Passes Away At 48 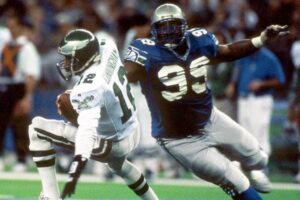 Cortez Kennedy was a dominant force during his hall of fame career in Seattle.

Sad news in the world of football today. Cortez Kennedy, the giant defensive tackle, who dominated his position like few others during his 11-year NFL career, has passed away. He was found today at his home in Orlando, Fla. He was 48.

Kennedy was an All-American during his college career at the University of Miami, and his dominating, spirited, play was a symbol of Hurricane football. He was taken with the No. 3 overall pick in the 1990 NFL draft by the Seattle Seahawks.

The big man  didn’t miss a beat in the NFL.

Kennedy played his entire 11-year career in Seattle, and was considered the best defensive tackle in the league for much of that time. He played in eight Pro Bowls and was named to three All-Pro teams. He recorded 58 sacks and forced 11 fumbles. Of course, at that position stats never explain the importance and the dominance of that position.

Standing 6-foot-3 and playing at 310 pounds, Cortez was one of the first athletic tackles, with the ability to make plays sideline to sideline. He was a superb blend of speed, power and quickness  for a man of his size. He constantly required double, and sometimes triple teams, which often freed up his teammates to make plays.

Kennedy was honored for his superb career with his induction into the Pro Football Hall of Fame in 2012.