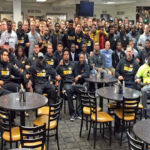 In 2015 the University of Missouri football threatened to boycott playing games to make their point about campus racism.

By Rickey Hampton, Editor and Founder of The AfricanAmericanAthlete.com

Remember the University of Missouri football team boycott in 2015?

History will chronicle it as one of the most significant moments in American sports, and it should serve as a template for athletes and activism.

In November of 2015 the University of Missouri football team stood up and spoke out about racism on the campus located in Columbia, MO., a college town of about 115,000 residents. Missouri’s enrollment at the time was 35,000, with blacks making up seven percent of that number.

They are remembered by a  powerful photograph (see above) that represents the essence of athletics:  Brotherhood, unity, courage, and determination.

And it took all of those intangibles for the Missouri football team to help make history, as their actions led to the resignation of then Missouri president Tim Wolfe and forced the school to address issues of diversity.

Let’s recap what brought all those people in that picture together, and why they felt Wolfe should resign.

A student protest began with a hunger strike by Jonathan Butler, a graduate student who was protesting the racist atmosphere on campus, and what he and others believed was Wolfe’s slow response to a series of racial incidents on the campus.

There had been several incidents on campus:

On September 11, Payton Head, the president of the Missouri Student Association, who is African-American, was verbally assaulted by a group of students in a pickup truck. They shouted “nigger” repeatedly, at him while he walked home.

On October 5, a group of students members of the ‘Legion of Black Collegians’ was verbally assaulted with chants of “nigger” as they attempted to rehearse a play on the campus plaza.  Black journalism students were verbally attacked and called “nigger,” with threats of attacks by the Ku Klux Klan.

Finally, on October 24, a swastika was painted on a campus building in feces.

Thirty black players on the football team felt Wolfe was not responding to the problems on campus.

Anthony Sherrils, a sophomore, safety at the time, shared the players’ feelings via Twitter: “The athletes of color on the University of Missouri football team truly believe ‘Injustice Anywhere is a threat to Justice Everywhere. We will no longer participate in any football-related activities until President Tim Wolfe resigns or is removed due to his negligence toward marginalized students’ experiences.”

But here is what makes this story so significant.  The ‘Missouri 30’ was not left to stand alone. They were joined by most if not all, of the members of the football team, black and white.  That also included the coaching staff led by head coach Gary Pinkel.

The athletes used their power as performers in the multi-million dollar industry that is college football to make a point on racism.  The possibility of a team boycotting a football game would have cost the University of Missouri millions.

Money talks, and the possibility of losing money really talks a lot.

Seventy-two hours after announcing their boycott, Wolfe had resigned.  A nine-month search led to the naming of Mun Choi as the university’s new president. He is the first Asian-American president in the school’s history and has pledged to make Missouri a more diverse and tolerant community. There is a plan to hire more black faculty and counselors, and a plan to improve the retention of marginalized students.

Pinkel retired following the season. He is now 66 and authored a book ‘The 100-yard Journey’, and doing speaking engagements.

Three players from the Missouri roster were picked in the 2016 draft. Center Evan Boehm by Arizona, guard Connor McGovern by Denver and linebacker Kentrell Brothers by the Vikings. In the 2018 draft linebacker Charles Harris was the No. 22 pick by the Miami Dolphins.

Although not everyone on the Missouri football team felt as strongly about the issue as others, they came together with a unified front. It should serve as a template of what athletes can do to make a difference in society beyond the playing field.