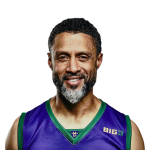 Watching the sheer firepower of NBA legend Mahmoud Abdul-Rauf in the Big 3 league shows what a disgrace it was that he was blackballed by the NBA in his prime. The former LSU star and No. 3 overall draft pick of the Denver Nuggets in 1990 is one of the most important athletes of our time.

In 1996 he called the American flag ‘a symbol of oppression’ for black people and poor people. That sparked a nationwide controversy, and eventually shortened his NBA career. Of course, Abdul-Rauf, who today travels the country speaking for justice, equality and human rights, has no regrets.

And at 49, he is still a breathtaking talent. Checkout his highlights from a recent Big 3 game. Below the highlight package is an interview with the AfricanAmericanAthlete.com talk show conducted earlier this year.