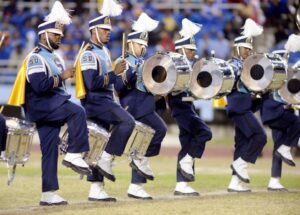 The Southern University Human Jukebox marching band is one of nation’s finest bands.

The college football season is only a few weeks old, but the incredible Southern University ‘Human Jukebox’ marching band has already put together what is sure to be one of the best halftime performances of the year.

The Jukebox, casually dressed in shorts and tee-shirts for their home game performance against South Carolina State, were in mid-season form.

They marched and played with such immaculate precision that it seemed computer generated. But no, the HJB marching band is the real thing. Their masterful showmanship, playing and dancing is something not even a computer could emulate. Check out the video below: