Home Featured TYPICAL OF TIGER TO VISIT W.H., BUT WHY DID BAYLOR WOMEN VISIT THE MAN WHO SAID ‘GRAB THEM BY THE’ YOU KNOW WHAT?

TYPICAL OF TIGER TO VISIT W.H., BUT WHY DID BAYLOR WOMEN VISIT THE MAN WHO SAID ‘GRAB THEM BY THE’ YOU KNOW WHAT? 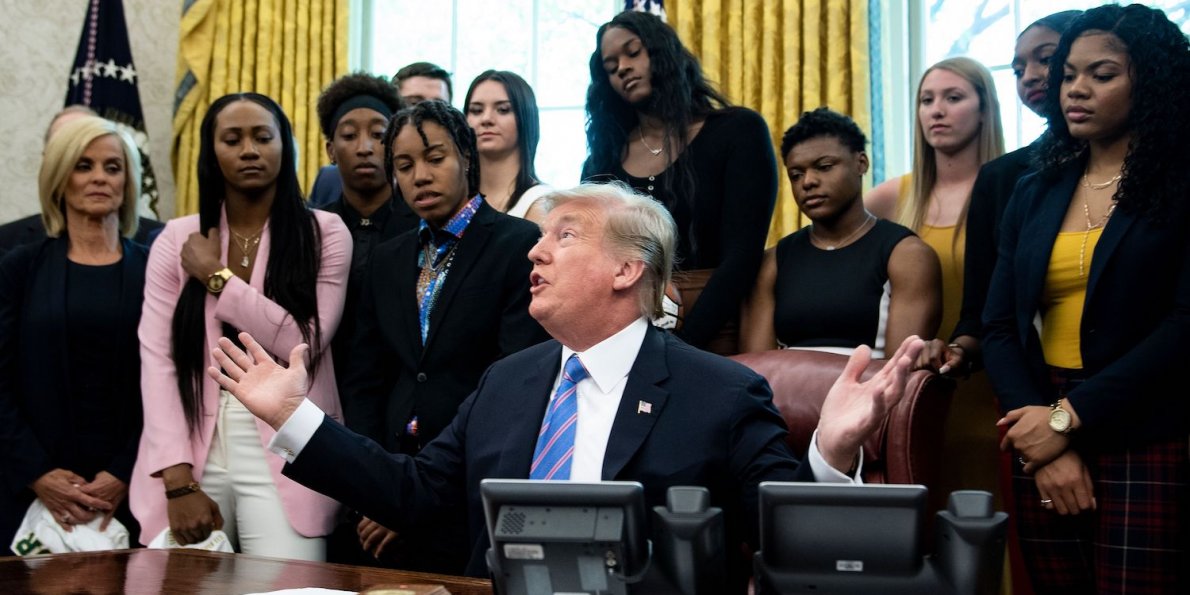 The looks of many of the faces from the Baylor basketball contingent says it all about their trip to the White House.

Tiger Woods is scheduled to celebrate his recent Masters’ victory with a trip to the White House today, where he will receive the Medal of Freedom from the current president.

This would have been a great opportunity for Woods to show his displeasure for the utterly disgusting behavior the current president conducts himself with on a regular basis by simply declining the opportunity. Certainly, it would be quite unusual for someone to turn down such an honor, but these are indeed unusual times.

The behavior of the current president is quite unusual and is not normal.

Tiger Woods is the greatest player in the history of golf. However, his decision to befriend such a racist, chauvinistic, man as the current president, and remain ‘A-political’, will always follow him.

Woods’ visit brings to mind a recent visit to the White House by the Baylor women’s basketball team, who captured the NCAA title last month.

What was Baylor University thinking? 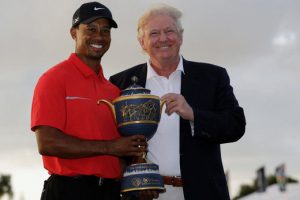 Tiger Woods and the current president.

The university actually sent its team to visit an admitted sexual assaulter. Let’s not forget just some of the things that have come out of his mouth.

Do you remember his comments about ‘Grab ’em by the p$&!y“?

This is the current president talking on the Access Hollywood bus to Billy Bush:

He continued: “Then all of a sudden I see her, she’s now got the big phony [breasts] and everything.”

Later in the conversation with Bush, he says this about women:

Trump took advantage of his position of owning a beauty pageant to walk in on the contestants in their dressing room.

“I’ll go backstage before a show, and everyone’s getting dressed and ready and everything else,” he told radio host Howard Stern in 2005 interview. His status as the pageant owner entitled him to that kind of access, the current president Trump explained.

“You know, no men are anywhere. And I’m allowed to go in because I’m the owner of the pageant,” he said. “And therefore I’m inspecting it… Is everyone OK? You know, they’re standing there with no clothes. And you see these incredible-looking women. And so I sort of get away with things like that.”

This is the man the people at Baylor University thought it would be OK for their female student-athletes to go visit the White House to celebrate their title.

I will tell you this. If I had a daughter who played on that team she would not have made the trip.

And, judging by some of the sour faces I saw during Baylor’s meet and greet, it’s clear to me that there were some of the team members who did not want to be there.

There have been other sports teams, pro, and college, that either declined a visit to the White House during this current president’s term _ like Virginia, the NCAA men’s basketball champions _ or simply made it clear they weren’t going to go, like recent NBA champions the Golden State Warriors.

Surely, there were some politics involved here considering that Baylor is deep in the heart of Texas, which is staunch Trump country.

But there are times when politics should be put aside over character. The current president’s history with women should not warrant him the honor of hosting a women’s national championship team.

And it should have been beneath the dignity of Baylor University to send their student-athletes to Washington to be in the presence of such an immoral man.