Waiting And Hoping For The HBCU Signing Day Shocker 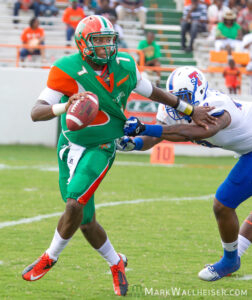 By Rickey Hampton, Editor and Creator of The African-American Athlete

In recent years the annual NCAA signing day has become as elaborate as a show on the Las Vegas strip. Young men from coast to coast hold us in suspense in all different manner of ways, as they announce where they will ‘take their talents’.
Meanwhile, fans and alumni from around the country hold their collective breaths hoping enough of these talented young players choose their school.
I get the fuss. After all, it’s like getting married. You only do it once, or twice, or maybe three times. A kid will only go to one school, unless he transfers a couple of times.
Each year, I wait for the day a blue chipper _ the guy all the power schools like Alabama, Clemson, Southern Cal, Notre Dame, Ohio State want _ to put on a cap that reveals one of America’s HBCUs. These are the words I want to hear him say:
“I am taking my talents to Tennessee State University (feel free to insert the HBCU of your choice in this imaginary tale). I chose TSU for a variety of reasons, both personal and career wise. 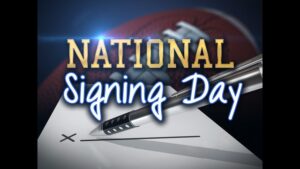 “On a personal level I had many members of my family, dating back generations, who attended TSU. Some of them where there when it was called Tennessee A&I. My great grandfather attended when it was called Tennessee Normal School for Negroes.
“It is an honor to walk in the footsteps of not only my family members, but so many others who have come before me in Black America’s journey to freedom.
“Now, from a career standpoint, it was really a no-brainer. TSU has sent dozens of guys to the National Football League. So, my dream of playing pro football can certainly be realized here.
“Even more importantly, I can fulfill my lifetime dreams here. If I want to go into coaching after my football days are done, my chances are far greater that it will happen at TSU. If I decide to pursue education, and possibly become a college president, my chances are much greater at TSU.
“When I look at major college programs today, I don’t see enough people who look like me in positions of power. I read studies that tell me 88 percent of the athletic directors are white, and only 13 percent of college presidents are of color.
“That explains to me why there are so few blacks coaches in at the major schools. By going to TSU I will have a chance to come back and be the head coach, the athletic director, or the president History tells me I can’t say that about Michigan or Ohio State.
“Finally I know going here I don’t have to worry about the racism that still takes place on college campuses like the University of Missouri. At TSU I am confident that I will be accepted for the person that I am, and I know my culture and heritage will be respected.
“For me, being in place where I feel comfortable makes up for playing on national television every week. With that said, I want to thank all the outstanding schools that recruited me. I am heading to TSU. I want to go to the place that is best for me.”
Now, will this ever happen? Perhaps one day a kid will see beyond the lure of the power schools. He will probably come from a household in which has parents attended HBCUs. They will have an understanding of what HBCUs can’t offer such as world-class practice facilities, and an appreciation of the more substantive things they can offer preparing their son beyond the athletic arena.
Yeah, somebody is going to flip the script. I only hope I am around to see it.