Watch This Representation Of The Ilk The Current Prez Caters To 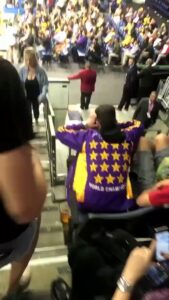 Watch the video to see what this woman does.

I would say you would never believe what happened to a couple of youngsters at a recent Lakers game. But in this day and age, just about anything goes.

Check out what happens to these guys who decide to take a knee during the national anthem:

This is so wrong on so many levels. Most profoundly, and ironically wrong, this woman is so concerned about the respect of the flag, that she feels compelled to disregard and disrespect everything it stands for.

She flips off the notion of tolerance and respect for the rights of all Americans to self expression of grievance with the government. She spits in the face of the concepts of Christianity upon which so many believe uniquely informed the construction of the tenets of this nation.

Instead of conducting herself with an iota of self respect she up and walks down and throws a beverage on people she doesn’t even know.   Now, if one of those guys had gotten up, and retaliated, she would be expecting the same principles of our country to protect her rights. I hope those young people reported her to the proper authorities at the arena, and including the police. Let’s hope she is punished for her behavior by the very system she purports to hold so dear.

But don’t hold your breath.  We are now living under the powers of a man who clearly has  no regard for our nation.  We live under the quasi dictates of a person who encouraged people of this woman’s ilk and ignorance to ignore the laws of the nation, and attack people at his rallies.

Perhaps it is time for those of us who really love this nation to stop acting as though the significance of the Russian involvement ends with our election, and start focusing on exactly what values alterations are being brought about by the Racist in Chief.