When Will We Have A ‘Cleveland Moment’ In Support Of Kaepernick 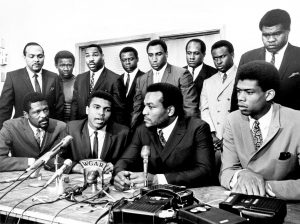 In 1967 pro athletes from all sports got together to support Muhammad Ali.

We need a ‘Cleveland Moment’.  We need a group of professional athletes to stand behind Colin Kaepernick, the way black stars stood behind Muhammad Ali in 1967 during his fight with the government.

We need a ‘New Orleans Moment’. We need some pro athletes to show the courage 21 black AFL All-Stars showed when they boycotted the 1965 AFL All-Star game.

We need a ‘Missouri Moment’.  We need pro athletes to show the courage the young black men on the University of Missouri football team showed in 2015, when they spoke out about the racism on their campus. Their stand led to the resignation of  the school president.

We need a ‘Mexico Moment’. We need more individuals like  John Carlos and Tommie Smith standing black and proud at the 1968 Olympic Games, Carlos and Smith were speaking about the same injustices of the black community that Kaepernick spoke to last year.

It is almost guaranteed when discussing the plight of Kaepernick, who is being punished by NFL ownership for his stance on injustice last season, that you will hear “Why aren’t the players supporting him?” 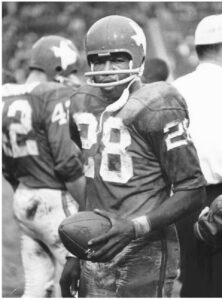 Abner Haynes and 20 other AFL stars boycotted the 1965 All-Star game.

That is a perfectly logical question to ask. And to be fair, there have been players such as Seattle’s Richard Sherman who have been outspoken.

But, in general, most of the athletes are simply minding their business, which is precisely what the NFL wants them to do.  Apparently, many of them are intimidated by the NFL. They  don’t want to end up without a team, without a job, and without a league, like Kaepernick.

It is reasonable for many of them to think that way. However, they should be reminded the very reason they are employed in the NFL, NBA, MLB and the NHL are because of sacrifices that were made before them.

Today’s professional athletes owe their careers and lucrative salaries to those men who stood up for them in the past. They also owe it to the next generation of professionals who follow them. 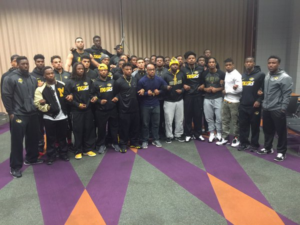 You remember when LeBron James, Chris Paul, Carmelo Anthony and Dwyane Wade stood up at the ESPYs and challenged athletes to be more socially active.

Some people feel today’s athlete has more to lose than those who came in the 60s. I disagree.  The men of yesterday did not have the financial security, or the social freedoms, that professional athletes have today. During the offseason they often worked part-time jobs.

James, Paul, Anthony and Wade don’t ever have to make another basket, and their families are secure for generations to come. Not only that, there are dozens and dozens of professional athletes who have made absolute fortunes as salaries have skyrocketed throughout the world of sports in the past 25 years.

Black athletes comprise 70 percent of the NFL and 74 percent of the NBA. They can often earn a lifetime of money in one season. According to Basketball Reference, 421 players in the NBA will make $1 million or more next season. Steph Curry is atop the list at $34 million, followed by LeBron James at $33 million. Veteran Gerald Henderson will earn $1 million next season. 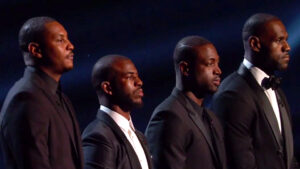 In the NFL, 964 players earn $1 million or more. Baltimore’s Joe Flacco sits atop the list at $24 million.

Now, I can understand that rookie professional athletes are just trying to keep their heads down, establish themselves, and make some money while they can.

We have to understand, pro sports mirrors life. You have the upper class, middle class, and journeyman on the bottom trying to hang on long enough to earn a pension.

Those athletes hanging on to their careers can’t afford to be as vocal as Sherman, or an Adrian Peterson, Cam Newton or Russell Wilson.

It is the responsibility of the established stars to lead the way.  They have the status, financial security, and the platform to bring these issues to light. I firmly believe it is an obligation and responsibility for them to do so, because long before they were even born, there were people speaking out for them.

Finally, the obligation we ask our pro athletes to honor is an obligation we all carry in the Black community. Practically every school door our children walk through, every job we have, from corporate executive to school teacher to football coach, was forged through the sacrifices of those who came before us.

We, as ‘Black America’ need to have our moment as a community.