Home Featured The Worst Person In The World? 45 Would Get Plenty of Votes

The Worst Person In The World? 45 Would Get Plenty of Votes 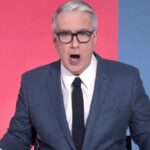 Political commentator Keith Olbermann’s ‘Worst Person In The World’ segment was made for the current president.

If you are a longtime follower of MSNBC, you probably remember Keith Olbermann, the former ESPN sportscaster turned political commentator.

One of the staples of Olbermann show during his stint at MSNBC was a segment called “The Worst Person In The World.” This segment would usually point out something dumb, terrible, horribly ridiculous, and sometimes all of the above, by people all over the world.

Well, there is no doubt in my mind that the person who currently resides at 1600 Pennsylvania Avenue may well be the ‘Worst Person In The World.’

He is a racist. He has cheated on his wives. He has admitted to sexually assaulting women. He backstabs his friends. He is a habitual liar. He has cheated in his business dealings. He even cheats at golf.  I mean, this man is supposed to be the leader of our country. But he leads in nothing.  It is amazing to see him pick fight after fight with any, and damn near everybody.

And, he refuses to take any accountability for his actions.  Clearly, there is nothing that man won’t do to benefit himself.  As the Russian investigation closes in on him,  (I am quite sure he would throw his own children under the bus to save himself), he even has tried to claim that wasn’t him on tape talking about how he sexually assaults women.

As I consider how disgusting this man is, he may not be the worst person in the world, after all.   At least he has been consistent. He has been a lying, cheating, racist, narcissist his entire life.

What’s worse are the so-called ‘evangelicals’ who have chosen to look past this man’s disgusting lifestyle, and support him at every turn. Many of those evangelical’s hypocrisy is even worse than this repulsive man.