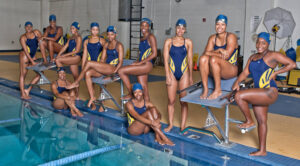 The North Carolina A&T University swim team competed for the final time in 2016.

That is a sad reality, and let me explain one of the reasons why.

Several years ago, 1987 to be exact, the late Al Campanis, then the general manager of the Los Angeles Dodgers, went on national television and made some comments that live in infamy.

During a discussion with ABC’s Ted Koppel on ‘Nightline’, Campanis talked about why there were no blacks in front offices, or managing teams in Major League Baseball.

“No, I don’t believe it’s prejudice. I truly believe that [African-Americans] may not have some of the necessities to be a field manager or perhaps a general manager,” he told Koppel.

Koppel was stunned by his statement,  and tried to let Campanis clear his explanation.

Instead, Campanis went even further. He talked about how black athletes don’t play thinking positions such as quarterback in football, and pitching and catching in baseball.

“Why are black men, or black people, not good swimmers?,” Campanis asked. “Because they don’t have the buoyancy.”

Campanis, tragically, dug an even deeper hole for himself.

“…About a third of the players [in MLB] are black. That might be a pretty good number, and deservedly so, because they are outstanding athletes.

“They are gifted with great musculature and various other things, they’re fleet of foot, and this is why there are a lot of black major league ballplayers. “Now, as far as having the background to become club presidents, or presidents of a bank, I don’t know.

“But I do know when I look at a black ballplayer, I am looking at him physically and whether he has the mental approach to play in the big leagues.”

Now, understand, this… Al Campanis had no malice in his heart. He was considered a good man. He was one of the few who supported Jackie Robinson, after he broke the MLB color barrier in 1947.

He was a very bright man, too, which is concerning when you consider his thinking on race was just archaic, stereotypical, and ignorant. And, frankly, it was along the lines of many people’s thinking of black athletes from that time, and, no doubt, today.

Campanis was fired from the Dodgers soon after those comments. It’s sad so many years of his good work was lost.

I thought about Campanis after hearing about the demise of the Aggies swim team.

Every time the Aggies hit the water they obliterated those stereotypes like ‘not having the buoyancy,’ and the ‘neccesities.’

Often, the Aggies were the only black athletes in the swim meets.  They always competed hard, and showed their class, grace and intelligence. The North Carolina A&T Aggies swim team were great ambassadors for the university, the African-American community, and all of those who seek diversity.

The young student-athletes understood the importance of what they were doing, and how it went far beyond winning and losing., thus their team mantra: ‘Black Girls Do Swim.’

A&T’s decision to end its program leaves Howard University as the only HBCU school with a swimming program.

This is disappointing to hear, not only for the athletic program, but for the university. Ideally, HBCUs can grow and offer its student body diverse experiences academically, socially and athletically.

This is why we celebrate Hampton University for fielding a men’s lacrosse team, the first HBCU NCAA Division I school to do so, and mourn the loss of the A&T swim team.

There doesn’t seem to be just one reason why the Aggies ended the program. Certainly, finances are an issue, as they are at most HBCUs, and even mainstream colleges in these uncertain financial times.

Actually, the program has been on the chopping block for a while, but the efforts of Aggies coach Shawn Hendrix have always been able to keep them afloat.

But more than black people not enjoying the sport, that figure speaks to the lack of facilities. The financial woes of many urban cities and school districts have cut programs like swimming out.

The fact MEAC only has two schools that compete in swimming, speaks to that. “There are about a hundred African American swimmers in the NCAA and I have 11 of them,” Hendrix said in an article appearing in The Guardian.

Of course, what these young people are really missing is the opportunity to find a place to swim.

When given such, black athletes such as Alia Atkinson can exel. In 2014 Atkinson shocked the world, winning the 100 meter breast stroke at the World Championships. She became the first African-American do so.

Hail to the women of the NC&AT Aggies swim team. You did more than go out and simply compete over the years, you helped smash some of the archaic thinking of days gone by. Linked below is Alia Atkinson winning the World championship in 2014, and the Campanis ‘Nightline’ interview: