1947 All Over Again: Baltimore’s Jones Rocked With Racial Slurs At Fenway Park 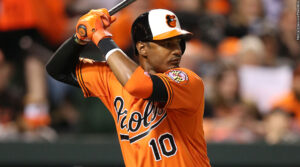 By Rickey Hampton, Editor and Founder of The African-American Athlete,

There were only 62 black players on Major League Baseball rosters at the start of opening day this week.  But apparently, for some people in Boston, that’s about 62 too many.

Baltimore outfielder Adam Jones was the subject of racial epithets during Monday’s night’s game at Boston’s Fenway Park. What should be noted here is this isn’t the first time Jones has heard this in Boston, or other stadiums, for that matter.

This was just the worst of the worst.  According to reports, several people were ejected from the game.  One person threw a bag of peanuts at Jones, and used racial slurs.  Jones pointed him out, and he was ejected.

“Tonight was one of the worst.  It’s different.  Very unfortunate,” said, Jones, in his 12th season,  following the game.  “It is what it is, right?  I just go out and play baseball.  But it’s unfortunate that people need to resort to those type of epithets to degrade another human being.

“I’m out there trying to make a living for myself and for my family.  The best thing about myself is that I know how to continue to move on, and still play the game hard.  Let people be who they are.  Let them show their true colors.”

Consider what Jones dealt with Monday night is the same thing Jackie Robinson dealt with in 1947, and this is 2017. So, you wanna tell me how far we have come?

It is up to MLB franchises to enforce this with zero tolerance. The guy who threw the peanuts should never be allowed in Fenway again. Jones wants them to pay financially, as well.  For more click video link.