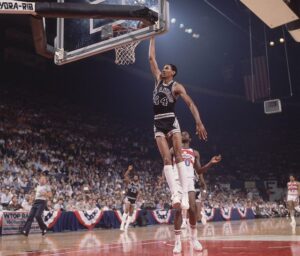 The legendary George ‘Iceman’ Gervin was among a legion of stars who made the transition from the ABA to the NBA.

During the celebration of the United States of America’s 200th birthday (Bicentennial), the competing pro basketball league to the NBA shutdown their association, after nine seasons (1967-1976).

The ABA ceased operations, but negotiated a deal to send four teams to the NBA:

In addition to the quartet of teams, there were a multitude of great players joining the top pro hoops league, via dispersal draft, trades, or other means.  However, the Red, White and Blue ball did not make it to the NBA,

This influx of new talent from the defunct league was led by the incomparable Julius Winfield “Dr. J” Erving, of whom the NBA’s Milwaukee Bucks selected in the 1972 Draft, but remained in the ABA (Virginia Squires).  If he did honor that invitation, he would have teamed up with two legendary players and champions, Kareem Abdul-Jabbar and Oscar Robertson.

A few of the other stars making the transition were George “The Iceman” Gervin, Artis Gilmore, David Thompson, Maurice Lucas, Moses Malone, and etc. 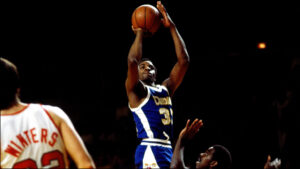 Within the first year, the newbies were making a dramatic impact, as Erving joined the 76ers, teaming up with former ABA star, George McGinnis. Lucas made his way to Portland, and played with former UCLA legend, Bill Walton.  Low and behold, those two teams met up in the 1977 NBA Finals, with the future Rip City upsetting the heavily talented  squad commensurate to the 1776 celebration, 4-2, despite Philly initially having a 2-0 lead.

As for the ABA Class of ’76 earning their keep, David “Skywalker” Thompson, of the imported Denver Nuggets, was First Team All-NBA, while Sixers’ Doc and San Antonio Spurs’ Ice, were both Second Team selections. 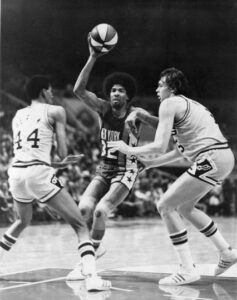 Julius Erving and George Gervin brought their prolific open-court games to the NBA.

Also in that initial transition season, Julius earned the 1977 All-Star Game MVP honors, coincidentally, in the NBA city that drafted him, Milwaukee.  Over the next three years, two more All-Star game awards would be handed out to a duo of former ABA Alums, Thompson ’79 (in Detroit) and Gervin ’80 (in Washington, D.C./Landover, MD).

The Iceman would go on to win four scoring titles, including three in a row. However, one of those honors was after a down to the wire classic  battle with Skywalker in 1978.  On the last day of the season, Thompson scored a whopping 73 points, ironically in George Gervins’s hometown of Detroit. The Iceman  responded big time later on that night, with 63 points in three quarters, which included a then NBA record 33 points in a quarter.

According to Gervin’s younger brother, Derrick, who also played in the NBA (NJ Nets) and is a frequent guest on the African-American Athlete Radio Show. Derrick expressed great fondness for the ABA: “The league was very exciting, and felt the Red, White and Blue ball was special.  I loved the 3-point shot, which came to the NBA; I like what we’re looking at now.”

Of the four teams absorbed into the NBA, the San Antonio Spurs are the most successful.  Although the Iceman led squads (1976-1985) didn’t win an NBA title, they were consistently good over that near decade.  The David Robinson/Tim Duncan Era produced five championships (1999-2014), with a slight chance for number six during these 2017 Playoffs.

The New York Nets won two ABA championships (’74 & ’76), led by Dr. J.   In 1977, they became the New Jersey Nets, and that version made it to back to back Finals (2002 & ’03) with Jason Kidd running the show, but lost both series.  The franchise moved to the borough of Brooklyn in 2012, where they presently reside, sharing the Barclays Center with the NHL’s New York Islanders. 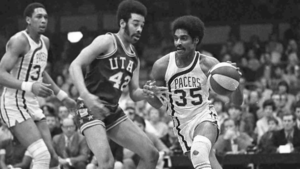 Indiana’s Roger Brown (35) and Mel Daniels were a tremendous duo.

one NBA Finals (2000), with Reggie Miller as the man, but lost to the mighty Lakers, with Shaq and Kobe.

The Denver Nuggets (Rockets) were three-time runners-up in the ABA, but no title.  In the NBA, they have been a high scoring, sometimes exciting franchise, with the likes of David Thompson, Dan Issel, Alex English, Kiki Vandeweghe, Carmelo Anthony, etc., but haven’t been anywhere near an NBA championship, let alone the Finals.

Although there was some resistance to the brand of basketball that came from the other league, or the changing demographics and culture, but eventually the popularity grew exponentially.

Within three years of the agreement, All-World college stars, Ervin ‘Magic” Johnson and Larry Bird entered the NBA, giving the major sport a huge boost in prestige and viewership.

The three-point shot, another import from the ABA, was introduced in 1979.  This addition absolutely affected the sport, as the present-day Golden State Warriors have exemplified on a nightly basis.

During the momentous time in basketball history in the Mid-70’s, there wasn’t the worldwide appeal for the NBA, as it is now.

Besides the importation of talent from the ABA, as well as some of their stylistic attributes, it took Magic/Bird, MJ, cable TV, international marketing, and the Dream Team, to really make the Association an UBER popular entity.

Four decades after the foursome joined the NBA, they have proven they belong in basketball’s elite league, especially the multi-champion San Antonio Spurs.

Even with more team expansions, an excess of international players, huge TV contracts, and two more commissioners, the 1976-77 season has proven to be the most important/influential “moment” in basketball history.

Just as the AFL/NFL merger changed American pro football, the same scenario can be applicable for the partial NBA/ABA conjoining.