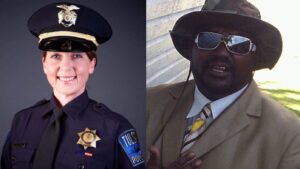 Tulsa Police Officer Betty Shelby was found not guilty in the shooting death of Terrence Crutcher.

After nine hours of deliberation, a jury found Tulsa, Oklahoma police officer Betty Shelby not guilty of first-degree manslaughter in the shooting and killing Terrence Crutcher, an unarmed motorist, in September of 2016.

Do we really need to say that Shelby is white, and Mr. Crutcher was black?

This tragedy is the latest example of what happens far too often when blacks come in contact with white police. In this case most of the incident is caught on tape, as Shelby shoots Crutcher less than two minutes after stopping him on a traffic stop.

Clearly, what made Crutcher a danger in Shelby’s eyes was the fact he was a 6-foot, 240 pound,  black man, although she maintains that his race played no factor. In my mind, Shelby panicked. She choked. She was terrified. And she shot Crutcher  for no reason.

And this was her explanation in a recent 60 Minutes interview: “I have sorrow that this happened, and this man lost his life” said Shelby “But he caused the situation to occur. In the end, he cause his own [death].”

This is why we, as black folk, have to explain police encounter survival techniques to our children, and practice them ourselves.  And as the death of Terence Crutcher demonstrates, you can do all those things and still end up dead.  But judge for yourself.  Click the link and watch the video for yourself: 60 Minutes Video