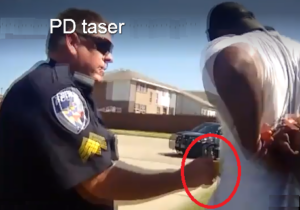 A leaked video to a Texas television station shows a policeman from the Balch Spring, Tx., police department using his taser on a black man who is in handcuffs, and showing no resistance whatsoever.

Video  shows Marco Stephenson, 39, on his knees with his hands on his head. He is offering no resistance and is following orders. Officers  walk towards Stephenson, and kick away a BB gun. As the officers cut his backpack off, things go downhill. Watch the video and interview of Stephenson.

In attempt to stifle some of the blow back from this video the department has brought up Stephenson’s long criminal history.  Of course, because the man has a criminal past doesn’t mean you can treat him with criminal intent of your own.

Balch Springs police chief Jonathan Haber said the  actions of the police officer were more of an administrative issue, and not criminal. He is worried about the video being released in the wake of the shooting of 15-year-old Jonathan Edwards. 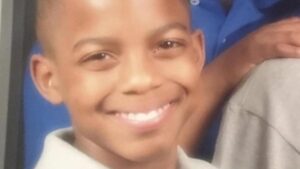 You may remember that Edwards was shot and killed by officer  Roy Oliver. Edwards was killed by a rifle bullet fired into the car with five passengers in it.

Initially, police officials said the car was being ‘aggressive’, as if it was attempting to run the officer, Roy Oliver, down.  Those reports were incorrect.  In fact, reports say video shows the car was actually moving away from the officer.

Clearly, there is a culture among far too many law enforcement officers who feel it is perfectly OK to gun down black men.  Even worse, there is silence among far too many who are in law enforcement who don’t speak out on this deadly problem.  Those who stand by and allow this to go on are just as guilty as those who commit these grievous actions.  Accessories after the fact.