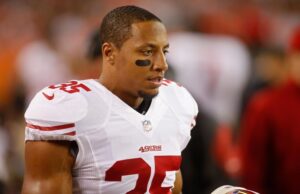 Eric Reid of the San Francisco 49ers is on point with his critique of the vice president’s stunt at Sunday’s Colts-49ers game. (photo: USA TODAY)

I am sure you heard the vice-president Mike Pence’s stunt at the Indianapolis Colts-San Francisco 49ers game on Sunday. When more than 20 players decided to take a knee during the playing of the national anthem, the vice president was so outraged that he walked out of Lucas Oil Stadium.  Pence likes to put himself out as if he has this high moral integrity.

Of course, that’s some straight B.S.

I find it odd that he would be so upset he couldn’t stay in a stadium with men who choose to use their freedom of speech, yet decided to run for office with a man who claims he likes to grab women by their private parts,  who bragged about walking in on teenage girls getting dressed as beauty contests, who was  found guilty in court of discriminating against people of color, and thus is a known misogynist and an utter racist.

Pence wasn’t offended enough by any of those things (and we did not even mention the constant lying) to disassociate himself from that man. But, he decides to walk out of a football game because he is so offended that he finds himself incompetent to uphold rights to free speech.

As I mentioned earlier, that’s some straight B.S. Check out San Francisco’s Eric Reid. He has offered thoughtful and insightful words on this issue from the beginning: