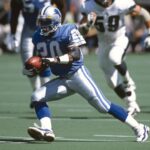 Barry Sanders is one of the greatest running backs in the history of the NFL.

Barry Sanders is 50. Where did the time go? It seems like yesterday that he left us breathless with one of his dazzling runs. During Sanders’ brilliant, 10-year  hall of fame, he made some of the world’s greatest athletes look helpless over the course of his career.
Every time he touched the football he had us on the edge of our seats. Standing 5-foot-8, and checking in at 205 pounds, the No. 3 overall pick in the 1989 draft out of Oklahoma State, had the subtle power to break tackles, utterly extraordinary vision, elusiveness and speed.
A recent panel of NFL experts named Sanders the second greatest player in the history of the game, behind the great Jim Brown. Sanders retired following the 1998 season at the age of 30, despite having plenty of gas in the tank. He finished with 15,269 yards rushing, and 99 touchdowns. He averaged 5.0 yards per carry over his career. Brown is the only other player to average 5.0 per carry. Most will tell you that Sanders is the most dynamic player in the history of the game. The tape doesn’t lie. Enjoy this electric highlight reel of Sanders.