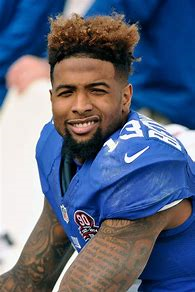 Odell Beckham’s new contract could have a significant impact on future NFL deals.

Recently, Odell Beckham Jr. of the New York Giants became the highest paid wide receiver in the NFL. With a flashy personality and undeniable talent, the 25-year-old receiver got a five-year, $95 million deal. There is no doubt he has what it takes to not only be the face of the league but perhaps the greatest receiver ever. Only time will tell in regards to his place in history, but one thing’s for certain, other star players in the league will look for huge contracts after this.

Aaron Rodgers is also someone who got paid a nice sum of money. Actually, that may be an understatement. Rodgers and the Packers just agreed to a 4-year $134 million extension on Wednesday. There is no doubt Aaron Rodgers is the most talented quarterback in the league. With only one Super Bowl title and early playoff exits recently, some may question whether he deserved this huge contract.

Both Beckham and Rodger’s contracts signify something huge that many teams and owners are looking for.

Running backs like Le’veon Bell continue to complain and argue that they deserve deals such as these. Numerous NFL players have been distasteful of the contract offers that many players have received. It is unrealistic for any player to receive the contract that Lebron James has for the Lakers (four-years, $154 million), but Rodgers was pretty darn close.

This signifies that some NFL  teams are willing to spend big bucks and offer NBA star-level contracts to players, but only based on certain circumstances. Quarterbacks, wide receivers, and offensive lineman are currently considered the most value and usually have a greater chance of more guaranteed money and large contracts than other positions. Running backs and defensive backs may feel a certain type of way, but the reality is that in today’s NFL, they are much more replaceable and generally have lower career lifespans.

Unless you exhibit shut down abilities against star players in your first few years like Jalen Ramsey, or have the prowess and youthfulness of a Todd Gurley, do not expect to get a huge contract, no matter how many Pro Bowls or accomplishments you have.

Whether the ideology of this is ethical or not, this is the reality of the NFL.

Both Odell and Rodger’s contracts prove this, and the Le’veon Bell’s of the world will have to accept that.

When kids think of professional athletes, one of the main things they focus on is money. Kids are more likely to pursue sports where they have the chance to make the most money. In the past, many kids wanted to be running backs or shutdown corners. Because of Beckham’s and Rodgers’ contracts, this can have a profound effect on what positions kids focus on in the future.

Every kid seems to have an Odell Beckham jersey these days. Kids also play more 7-on-7 today and notice the attention and contracts that quarterbacks like Rodgers, Tom Brady, and even Cam Newton receive.

All in all, you can still get the type of contract you want in the NFL, you just have to play the right position, have enough time in your career lifespan, and a megastar personality doesn’t hurt.