Home Featured Besty DeVos Should Not Have Been Booed At B-CU…. Because She Never Should Have Been Invited

Besty DeVos Should Not Have Been Booed At B-CU…. Because She Never Should Have Been Invited 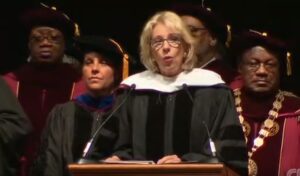 Betsy DeVos disastrous speech at Bethune Cookman could have been avoided, if the only the BCU president would have listened.

What did Bethune Cookman University president Edison O. Jackson think was going to happen when he invited Secretary of Education director Betsy DeVos to be the speaker at the school’s recent commencement ceremony?

DeVos was heckled by many who attended the ceremony. Some students turned their backs on her, and some booed during her speech, while others protested outside.

Inviting DeVos to speak at B-CU is like inviting white nationalists to an NAACP meeting.

Clearly, DeVos had no history regarding HBCUs, and her ridiculous comments how HBCUs ‘pioneered schools of choice’ illustrates her ignorance.

Further, she represents a president who has no knowledge or concern, for the black community, and most recently (Feb 2017) removed HBCUs from oversight of the Department of Education (and thus, the central funding stream for colleges) and then questioned  the constitutional validity of funding to America’s 106 HBCUs. 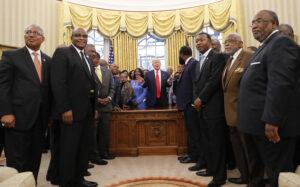 Donald Trump used leaders from America’s HBCUs for a phot-op at the White Houe.

All that Trump wants from black people and black institutions are photo-ops. Remember when he duped several HBCU presidents to coming to the White House?

With all that said, why would Jackson give this administration that doesn’t care about people of color, or poor people, another propaganda speech and photo op?

The biggest mistake that president Jackson made was thinking graduation ceremonies are about what he thought Bethune Cookman’s class of 2017 needed to hear. Graduation day should have been about the wishes of the Class of 2017.  They have abided by the rules of the university and met all the academic requirements to be conferred their degrees.

Thousands signed petitions protesting DeVos’ appearance, but the arrogance of Jackson could not be denied.  So, again, what did he expect after showing no respect for the Class of 2017’s wishes? How could he be surprised by the protests of DeVos?

You can tell the degree of Jackson’s arrogance when he scolds the graduates protesting as if they were school children. “If this behavior continues, your degrees will be mailed to you. Choose which way you want to go,” said Jackson.

I don’t know what was more disrespectful, inviting DeVos against the wishes of thousands of students (the schools primary customers), or the way president Jackson talked to the graduates.

Now, some may ask weren’t the students being disrespectful to DeVos by booing and turning their backs to her?

To that I say, hell no.  Betsy DeVos and the man she represents in Washington, have turned their backs on more than a century of history, and all the people that are remembered and uplifted by it. The protests of  the B-CU class of 2017 is in the greatest tradition of excellence, activism and legacies of America’s HBCUs.