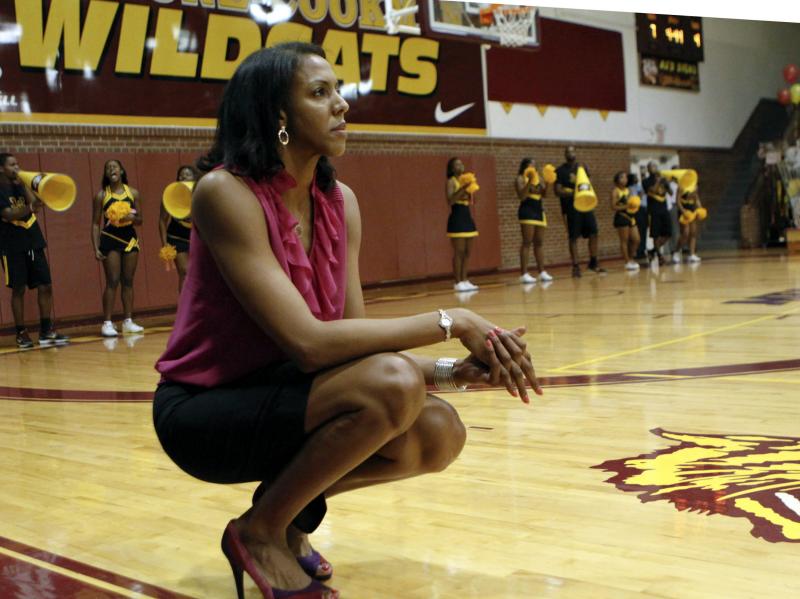 However, Blair-Lewis made an even bigger name during her playing days at Mount St. Mary’s (Md.) University. It was so big that school will retire her jersey No. 24 during a ceremony on Saturday (Jan.26).

“It’s absolutely mind-blowing,’’ Blair-Lewis says. “You go into school just trying to help the team win, to make a difference in the program, to leave an impact and a legacy, but I never thought this would be the outcome of those efforts. I’m just thankful that Mount St. Mary’s thought about me in this way that they didn’t think anyone else could do what I did in that uniform.’’

She was inducted into the Mount St. Mary’s Hall of Fame in 2003, 11 years after her collegiate career ended, and named to school’s 30th Anniversary Team in 2005.

Blair-Lewis ended her career at Mount St. Mary’s as one of the all-time Northeast Conference (NEC) greats. She was a three-time All-NEC performer and a three-time All-Tournament pick. She was named NEC Player of the Decade and was chosen to the NEC 20th and 25th Anniversary All-Time Teams.

Blair-Lewis, who earned NEC Player of the Year honors as both a junior and senior, wrapped her career as a three-time All-NEC performer and a three-time All-Tournament Team selection. All the accolades and accomplishments aside, Blair-Lewis says, “It’s a complete blessing’’ to have her number retired.

When Blair-Lewis replays her career at Mount St. Mary’s her thoughts go past the points she scored, the rebounds she grabbed, the shots she blocked, and any of her many individual feats. She thinks of her teammates.

“My teammates are what stand out,’’ she says. “I really played with some great young women. When I came into the team was already really good. It’s not like they landed me and all of sudden became good. Kim Rhock, Zena Edwards, Traci Branson, Erica Herbert, Susie Rowlyk.

“I had very unselfish teammates but they were hard workers. They showed me the ropes. When players came in under me, it was kind of like you passed the torch on, and we were able to continue such a great legacy of winning.’’

Blair-Lewis was a member of Mount St. Mary’s first Division I class. The Mountaineers were 80-30 during her career and reached the NEC Tournament Championship Game twice.

Blair-Lewis’ impact on Mount St. Mary’s basketball continued after she graduated. She said that God led her into coaching. She had an up close and personal view of the trial and tribulations that come with coaching – her father was her coach at Largo (Md.) High School and he spent 20 years in the profession – and she felt it wasn’t for her.

Blair-Lewis’ plan was to attend law school and become a prosecuting attorney. She put those plans on hold when she got an opportunity to play professionally in Sweden. A slightly torn MCL while playing in Sweden changed things. She had two options: she could have surgery or she could allow the injury to heel on its own, which would take 6-9 months. She opted to bypass surgery.

During that time, Bill Sheahan, her coach at Mount St. Mary’s suggested that she return to the Mount as his assistant coach while she rehabbed her knee. Her first response was “I don’t know anything about coaching.’’ Sheahan assured her she would be a great coach.

She took the position, but she still had the itch to play. When WNBA started in 1997, she decided to resume her pro career and signed with the Washington Mystics.

After being one of the team’s final cuts, she returned to Mount St. Mary’s for what she planned to be her final season as an assistant before enrolling in the University of  Virginia Law School.

Sheahan called Blair-Lewis into his office at the beginning of the 1998-99 school year and told her that he was going to retire the next day and that the school wanted her to be his successor. What’s more, they needed an answer that evening.

She immediately went into shock.

He was like, ‘You never know that. God knows.’ I took the job. I was 24 years old. It’s something I never prepared for. I’ve had a successful journey ever since. It was the best thing I didn’t know I could do.’’

Blair-Lewis was the head coach at her alma mater for nine seasons and compiled a 120-135 record. She led the Mountaineers to two NEC regular season championships and was the 1999 NEC Coach of the Year, making her the first person in conference history to be named Coach of the Year and Player of the Year.

She says she is thrilled that her team will be able to attend the jersey retirement ceremony.

Bethune-Cookman is scheduled to play at Morgan State on Jan. 26. Morgan State coach Ed Davis moved the contest to 1 p.m., which will allow time for the Lady Wildcats plenty of time to make the 1 hour, 15-minute drive from Baltimore to
Emmitsburg, Md., for the ceremony which will be held at halftime of the Mount St. Mary’s men’s game.

Blair-Lewis says she doubts if her team members will see her in a different light knowing that she was good enough to have her No. retired. But that’s not important to her.

“I always tell them, whatever you put your hands to do it with all your might as the Bible says. There are nuggets of greatness in just that verse. That’s what I did. I put my hands to something. I did it with all my might, and this is is my reward for it. I never sought it. I never thought I would go there and play great enough to have my jersey retired. For these young girls that I ‘m blessed to mentor for four years, I want them to feel that whatever they put their hands to, if they do it with all their might there is no telling the greatness that can come from that.’’

Blair-Lewis has become widely recognized as one of the most respected coaches in the country.

The round table focused on the lack of opportunities for black women to become head coaches in the years between the time Peck in 1999 while at Purdue became the first Black woman to win a National Championship and Staley winning the crown in 2017.

“It was good because it was really off the cuff,’’ Blair-Lewis says. “There was not a lot of strategy, let’s plan our answers and be so politically correct. We were able to just talk. We sat back there and it was the most amazing conversation for three hours. They could take off the cutting room floor and put together two or three more segments and would be just as mind blowing as that first 20-minute segment.

“All of us our roads have been very different to the success we have achieved. I think everybody along the spectrum was able to get something out of a Dawn story, a Felicia story, who was at a pinnacle and got fired, a Carolyn Peck story. It brought a conversation about. I hope it’s a conversation that will continue so that young women who look like  we do and who come after us will be able to break through ceilings a little easier than we have.’’