BLACK KIDS SHOULD DOMINATE SOCCER, HOWEVER… 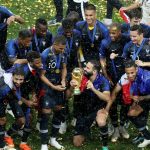 Recently when France overcame Croatia 4-2 in the 2018 FIFA World Cup final in Russia, I was simply glued to the action and the players. The preponderance of black athletes in the tournament just captivated me.

Now in my mid-sixties, when I reflect back to my youth as an athlete in inner-city Detroit, I realized just how myopic my vision of sports was. My crew and I only played football, basketball, baseball and ran track.

Do not get me wrong, those sports are awesome and has uplifted thousands of black boys and girls out of poverty and has exposed them to higher education. Indeed, those sports have given purpose to too many youths that had become demoralized due to their family environments and struggles with education.

As a retired teacher and coach, I have witnessed first-hand how sports have given purpose and define the direction of many. However, after watching the 2018 World Cup _ and in particular France _  I see there is so much more opportunity for inner-city youth to expand their vision of what may be possible via sports. 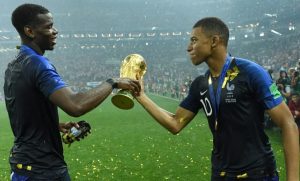 agility, coordination and swag, I could only wonder, why not here in America?

Well, the soccer situation in America’s inner-cities is non-existent. Looking worldwide, it’s obvious that the most popular sport in the world is filled with faces of all colors. Yet, soccer in the United States still finds itself at a crossroads when it comes to diversity, perhaps as much in how its perceived as the reality of who’s playing the game today.

Despite a US soccer boom, the sport has made barely a ripple in black communities. Could unlocking this talent base revive the failing national team? The US National team did not qualify for the 2018 World Cup.

Oh, how the world of soccer would change if America put any effort into giving opportunities to the millions of inner-city youth just falling short of the limited possibilities open in football and basketball.

If somehow we could get our inner-city school administrators to invest in soccer, maybe even wrestling and volleyball, what an expanse of opportunity that would present itself to our youth.

Soccer is one of the world’s most democratic games, played on streets and in alleys around the globe – just like basketball. It would seem a natural fit for America’s predominately black inner cities, where basketball thrives on playground courts. 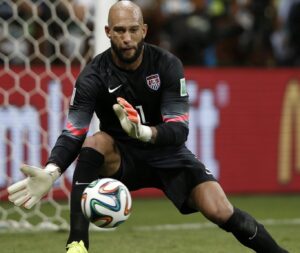 America’s media has long been small-minded, parochial and narrow-minded in its presentation of what sports are important in its newspapers, television, and broadcast highlights.

We have failed to inform our youth that soccer players are the highest paid athletes in the world, and its Super Bowl (World Cup) is the world’s second greatest gathering of nations after the Olympics.

In America, soccer is seen as a sport played by middle-class suburban kids. Even the term ‘soccer mom’ conjures up an image of a white, suburban mother shuttling her pre-teen kids to games in a plush minivan.

Our national team has been unable to develop dynamic, creative players (now playing basketball and football) who can compete at an international level. Many see the roots of this failure in the expensive, well-organized network of pay-to-play suburban leagues. Some parents spend more than $10,000 a year on membership fees and out-of-town club tournaments.

What about college opportunities? Well, competitions where college coaches find recruits and national scouts identify prospects are at the club level. Children in poor neighborhoods are priced out and struggle with the logistics of reaching training fields far from public transport and inner-city routes.

As a result, millions of children don’t ever try soccer – including some of the country’s best athletes.

“To not be allowing non-white kids to develop shows why we aren’t in the World Cup,” said Amir Lowery, a former Major League Soccer player and executive director of Open Goal Project. “A kid playing basketball and American football can see a chance to play in college, they see a path through. If you want to play soccer [beyond high school], there’s no path there. You don’t ever see college coaches at high school games. Mentally, the kids aren’t even thinking soccer is accessible.”

If our closed-minded media can expand its presentation and build a connection with the recognizable, pop culture stars such as Cristiano Ronaldo, Neymar, and Lionel Messi, as they have with stars LeBron James, Aaron Rodgers, Usain Bolt, Tom Brady and Bryce Harper, it would open minds and doors.

This would unlock a new smorgasbord of role models that would trickle down to possible sports choices youth scan as real potential opportunities to uplift one’s life.

Hylton Dayes is the men’s soccer coach at the University of Cincinnati, and one of only eight black coaches in all of Division 1 soccer.

The fact of the matter is soccer is simply not cool with African-American kids for lack of a better phrase. Who can be cooler than James, Brady or Curry per ESPN Sports Center?

The inclusion of soccer in inner-cities as a very real and viable alternative to football or basketball as Mandela noted, has the possibility to uplift thousands and thousands of searching youth.