Home Featured BLACK VETERAN EXPLAINS WHY HE KNEELS WITH KAP

BLACK VETERAN EXPLAINS WHY HE KNEELS WITH KAP 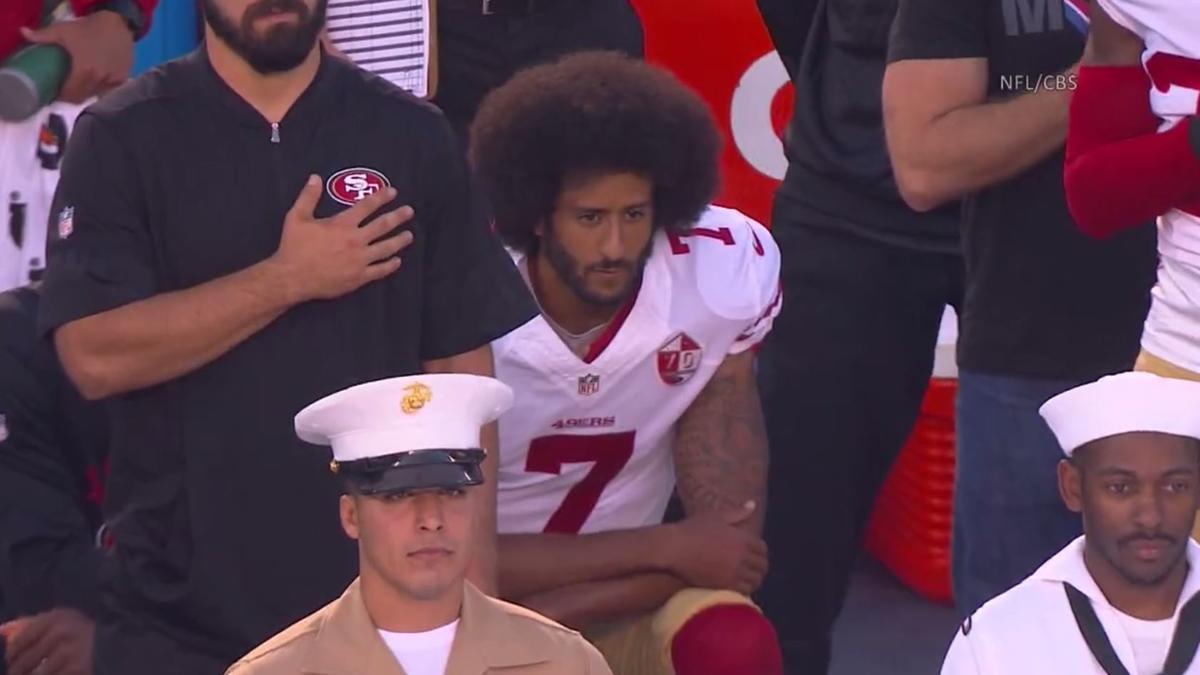 Lost in the dust of a political geo storm that weighs heavily from both sides of the fence, is the discussion of patriotism and the lack thereof from the ‘Black’ football players led by former NFL quarterback, and should still be playing, Colin Kaepernick.

Patriotism is not standing for the flag and taking your hat off, it’s not knowing the words to the star-spangled banner, it’s not saluting or toting the flag around as if it’s a shield of honor. Patriotism comes in many different ways but most importantly for me, and thousands of others, it comes with sacrifice.

You see I am veteran with 12 years of service. However, through my family alone we have given 40-plus years of service to this country through all branches of the military. This doesn’t give me more of a right to honor thy country than the next man or woman that has not.

However, what I will say is that not everyone is willing to raise that right hand and say I will sacrifice my life for those I don’t know, and for those that don’t like me based on the color of my skin.

Colin recognized that there was an injustice to the black community with our justice system, police brutality and the pure racism that sheds its ugly light on our society. America the great is not so great to all. And truthfully that’s ok, but that’s also why Colin took a seat to start a conversation.

Yes, I said he sat down.

It wasn’t until ex-long snapper and Green Beret Nate Boyer suggested that he kneel instead of sitting. You see a veteran like myself who knew how to show respect and still create an avenue to get people to start talking about the changes needed to actually make America great, not the rhetoric that our current president wants when he states make America great again.

Nate Boyer created an avenue for Colin. It is one that gets overshadowed because _ to be honest  _ white America doesn’t care. They only care about the black man kneeling, and not the reason behind it or why, or who suggested it in the first place.

From a global perspective, America is not that great anyway.

It’s the halo that we place on ourselves as being the “land of milk and honey” but we as African-American Soldiers are more respected overseas than we are in our own country. History has a funny way of repeating itself if you never heal the wounds that were opened. After each conflict, our Military has been involved in. Our African-American brethren and sisters were there serving a country that said you are 1/3 of a human to the white counterpart.

Yet we fight and fought with courage and conviction that this would show that not only am I your equal, but I too am a part of this country even more now than I was when you took my ancestors from my native Africa. Today, as yesterday, we still fight that fight. And today, just like before, we are still being shown that our lives don’t matter in America.

So, kneel Colin for those who don’t have a voice, kneel for the forgotten Soldiers who still face racism, kneel for police brutality and killings of unarmed men and women, kneel for the Trayvon Martin’s of the world, kneel for Sandra Bland, kneel for Serena Williams and kneel because we veterans raised our hand high to fight for those liberties and freedoms everyone, including you Colin Kaepernick, to have the right to do so.

(Mr. Clay can be contacted at Forrest.r.clay@gmail.com)