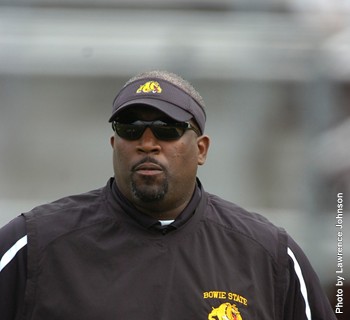 Bowie State University head football coach Damon Wilson was the guest on the latest edition of ‘Express Yourself with T-Ramone and ‘Sco’, hosted by sports writers Tim Turner and Roscoe Nance.

Bowie (10-0) is the only unbeaten HBCU school, and the Bulldogs will play Fayetteville State (8-2) Saturday in Salem, Va., for the CIAA championship.

Wilson, in his 10th season at his alma mater, talked about Saturday’s championship game, the Bulldogs’ chances of making a deep run in the NCAA Division playoffs, and the keys to building a successful program.

Tim and Roscoe also discussed Colin Kaepernick’s chances of playing in the National Football League again in light of his upcoming workout on Saturday, and they take a look at the home stretch of the college football season.

The Wilson interview picks up at the 30-minute mark.