Can The New Twin Towers Make Pelicans A Power? 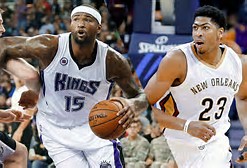 The pairing of Twin Towers Demarcus Cousins (left) and Anthony Davis in New Orleans will be fascinating to watch.

The 2017 NBA All-Star game was filled with profiling scoring, almost reaching 200 for each team. In a night filled with lobs, 3-point shooting, and transition, there was so much to take away.

The play of Giannis Antetokounmpo was also a sign of what he can do against the NBA’s best. Wilt Chamberlain’s one of many records was broken on this All-Star Sunday Night as well, with Anthony Davis dropping a dunk-infested 52 points to break Wilt’s previous All-Star record of 42 points.

But all of this may have been somewhat forgotten after the Kings and Pelicans announced a trade sending Demarcus Cousins to the Pelicans to play alongside Anthony Davis.

There’s no secret that small ball has been the strategy many teams are looking for. The success of teams such as the Warriors and Cavaliers playing small ball has warranted emulation from several other teams.

The old days of post, big man play in the paint have been extinct for a while now. With all that being said, there’s only one champion at the end of the day. Why play like the champions when you can be different and play to beat the champions?

The Pelicans may have found the answer to the overtaking of small ball in today’s league. With long, lanky big man becoming a more appreciated commodity and aspect of today’s game, small ball may turn into 7-footers stretch shooters with the agility of a guard.

In all honesty, the few teams that have tried to keep course with “old school ball”, such as the Grizzlies, haven’t been very successful during playoff time.

However, that doesn’t necessarily mean big men shouldn’t be sought after.

Demarcus Cousins, Anthony Davis, Porzingis, Towns, Myles Turner, Draymond Green, and every other player you may classify as a gifted “big man” have the ability to put the ball on the floor.

They also have the ability to step out and shoot the ball, attack the rim, and still take care of traditional “big man” duties.

What the Pelicans may have discovered is that instead of looking for three or four perimeter scorers and shooters to keep the ball with, it may be better to look for long, athletic big men to center around.

The Pelicans may have found the ingredient that can finally stop the domination of “going small”.

In a game in which Demarcus played two minutes and Anthony Davis won All-Star MVP, everything else in the All-Star game was overshadowed by this trade.

When thinking back to previous talented big man tandems in the NBA, this has the potential to one of, if not the best ever. Given their ages, versatility, and consistent play, this duo can become an unstoppable tandem for years to come in the Western Conference.

The last big man duo to have this sort of talent might just be Tim Duncan and David Robinson. No disrespect to them or previous big man tandems in NBA history, but Anthony Davis and Demarcus Cousins have the chance to become the best ever when it’s all said and done.