College Football Needs To Expand To An 8 Team Playoff System 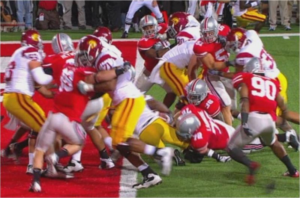 Expanding the playoffs would often add traditional powers like Southern Cal and Ohio State to the field.

By Maury Jackson, For The AfricanAmericanAthlete.com

The College Football Playoffs have been packed with excitement and controversy, heading into the National Championship game between Alabama and Georgia.

The Crimson Tide proved their defensive dominance once again by defeating No. 1 seed Clemson, while Georgia won a thrilling game against Oklahoma, in double overtime in a game compared to the 2006 Rose Bowl between Vince Young’s Texas team and the USC Trojans featuring Reggie Bush.

However, despite the exciting semifinal games, there has been controversy regarding the current playoff system and whether it should be expanded.

Expanding to an 8-team college playoff system would not only benefit college football in general, but it would ensure that all deserving teams would at least have an opportunity to play for the championship. Adding more teams to the playoffs certainly has some negatives, but the pros outweigh the cons. Some argue that expansion would diminish the importance of every week in college football. Others say it will take away the tradition of the bowl games.

But here’s why expanding is best for college football.

With an 8-team playoff, the few undefeated teams such as Central Florida (the lone undefeated this year) will get more support from the selection committee to have a high enough ranking and get a shot at at the national title.

While many agree that the SEC is still the best conference talent wise for football, some do not agree, and believe the system was biased to result in an All-SEC title game.

The national championship features two SEC juggernauts in Alabama and Georgia, leaving some in certain regions to be disappointed or uninterested. In the end, the best teams move on, but an 8-team playoff would result in fans from all over the country having a connection to the college playoffs, not just the southern region.

An 8-team college playoff system will also result in a myriad of memorable games towards the end of the season. Think if teams like Ohio State, Penn State, and others were added to the field of four teams from this year’s playoffs.

The starpower, fan support, and quality of games would exceed anything that NCAA football has seen before.

Also, star players will not sit out of these games, resulting in future high draft picks actually playing their college career to the end. The northeast and west coast support would rise dramatically.

As many bowl games as there were through the holidays, in reality, Oklahoma, Georgia, Alabama, and Clemson were the only teams on our mind.

Sure, the tradition and plentiful amount of games is great, but if you’re not truly a fan of Ohio State, you really don’t want to see them play in a meaningless Cotton Bowl.

An 8-team playoff is the perfect number because it has the top teams playing in meaningful games, while also still giving good and mediocre teams the chance to play in bowls games and give their fan bases something to celebrate.

Instead of having an entire month layoff for the playoff teams, an 8-team playoff could start the weekend of Christmas, with games played on the Friday and Saturday before Christmas. That is still plenty of time for athletes to regroup and still have the ability to spend time with family for the holidays. Some coaches even claim that the long break from the end of the regular season to bowl season is dragged out too long.

All in all, there are several benefits of an 8-team playoff and the implementation of this system is reasonable. It is just the right number, not too much and not too little, and would only leave college football fans leaving more satisfied toward the end of the season.