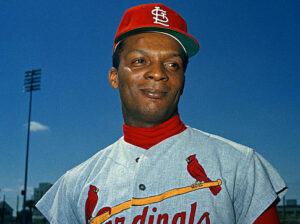 With the 2017 baseball season only days away, I wonder if any of today’s Major League Baseball players have an understanding of why their sport pays so well? I wonder if these guys know the battle it took for baseball players to earn free agency, and demand a better pay scale?

When it comes to player earnings, MLB stands at the top of the list, above the NBA, NHL, and NFL, in terms of player compensation.

The late Curt Flood is one of the main reasons why.  His fight for player rights paved the way for the free agency that MLB players have today, and his impact reaches into the NBA, NFL and NHL as well.

It is safe to say that every man and woman who signs a professional sports contract today owes Flood a bit of gratitude.

Flood was an standout center fielder for the St. Louis Cardinals in the 1960s, and helped the Redbirds capture two World Series titles.

However, when he was traded to the woeful Philadelphia Phillies in 1969, Flood balked. He was not willing to leave a championship caliber team in St. Louis, for a bad Phillies team.

Flood challenged MLB’s ‘Reserve Clause’ which allowed club’s to trade players. He petitioned MLB to allow him to become a ‘Free Agent’. MLB commissioner Bowie Kuhn refused his request. Flood decided to sit out the 1970 season, and forfeit his $100,000 salary (which was huge at that time) to take on MLB in court. He called MLB’s ‘Reserve Clause’, which gave the team the right to re-sign and trade players at will, “A master and slave relationship.”

I don’t have to tell you how well that statement went over in 1969, coming from a black man, in the height of the fight for equality. Flood was scorned, and despised, by many of the powers that be in baseball.

His suit to gain his rights as a free agent went all the way to the Supreme Court. Although Flood lost the court decision, the Major League Baseball Players Association (MLBPA) had gained the momentum it needed to eventually win free agency. In 1975, the MLBPA was awarded free agency for its players.

Flood eventually signed with the Washington Senators in 1971, but only played in 13 games before retiring, ended a career that began in 1956.

Flood’s autobiography, “The Way It Is” captures his fight with MLB. He later spent time working as a television analyst for the Oakland A’s. Flood passed away in 1997. He was 59.

Without his willingness and courage to take on the powers of baseball, it is hard to imagine where not only baseball, but America’s other pro sport, would be in regard to player-owner relationships. Linked below is a piece on Flood from New York Times digital media.