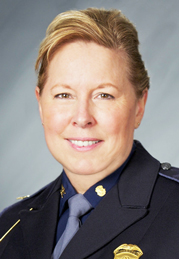 Kristie Kibbey Etue, the director of the Michigan State Police, should step down from her office.

United State Rep. John Conyers of Detroit is absolutely on point when he says that Michigan State Police Director Kristie Kibbey Etue should step down from her position following a Facebook rant that called NFL players ‘ingrates and degenerates.’

Conyers had to step in because Michigan Gov. Rick Snyder, the same man who looked the other way during the Flint water crisis, in which an entire city had its water poisoned, refused to ask Etue for her resignation.

Etue posted on her Facebook page posted a meme that called NFL players who kneeled during the national Kibbey anthem ‘degenerates’: “Millionaire ingrates who hate and disrespect our armed forces and veterans. A bunch of rich, entitled, arrogant, ungrateful anti-American degenerates.”

Etue’s post tells so much about how she really feels. Her post was filled with racial innuendo.  Clearly, she is referring to the black athletes, and she thinks they should be grateful because they earn a lucrative living in the NFL.

Despite her lame apology, she is speaking from her heart. But Etue is too naïve to understand that when black men are confronted by police, their social and financial standing means nothing.  And, she is too selfish to understand that because some black people are enjoying prosperity, they have not forgotten about those who have not enjoyed prosperity.

What is concerning about her attitude is the fact that she is the director of the Michigan State Police. She leads these men and women who patrol our highways and by-ways. How can her attitude not help but filter out to the troopers who work under her leadership?

And, of course, like the fire chief in Pittsburgh who called Steelers coach Mike Tomlin a ‘a good for nothing nigger’, and the man who called a black couple who sat during the national anthem “Ignorant niggers”, Etue is sorry for making those statements.

Etue apologized for her Facebook rant, but I know it’s a hollow apology, meant to save face and her job. The only thing she is sorry about is that it blew up in her face.